How to teach kids to code after Hour of Code?

In the first week of December thousands of teachers and volunteers around the world gave millions of student their first exposure to computer coding in Hour of Code events. But what happened after the Hour of Code events were over? A new teacher's guide provides a path forward.

"You can't run Hour of Code all year," says Kiki Prottsman, the Education Program Manager for Code.org and co-author of a new book, Computational Thinking {and Coding} for Every Student. The book, subtitled The Teacher's Getting-Started Guide, was written with Jane Krauss, a curriculum consultant and author of Reinventing Project-Based Learning. 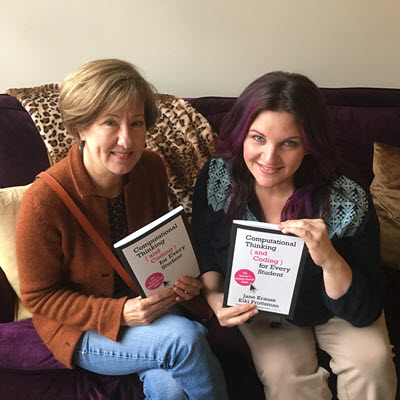 The single most important aspect of the book is that it assumes no experience with coding and computers. In fact, Prottsman at Code.org has "unplugged" lesson plans that don't even require computers. Like a piece of good coding, Computational Thinking takes teachers from initial enthusiasm to a complete curriculum with lesson plans without skipping any logical steps. The book approaches coding in familiar terms.

Have you ever completed a Sudoku puzzle? Can you sing or play a tune from sheet music? Can you decipher a knitting pattern or follow steps to fold an origami figure? If you’ve ever attempted any of these things, then you have already experienced one of the fundamental building blocks in computer science (CS), the algorithm.

As you read, notice parallels we've drawn with an industry you might be familiar with – filmmaking. From storyboarding to production, we will show you how computer science is the movie set where all of your students become stars!

Here is how Krauss and Prottsman connected coding to filmmaking:

With simple, non-technical language, Computational Thinking fills a gaping hole in most schools' curricula. According to Google, only a quarter of high schools teach computer science, with even fewer teaching it in the lower grades. Code.org found that only 32 states count Computer Science coursework toward graduation, usually as a science or math credit. In the rest of the states, Computer Science counts as an elective, which means many college bound students don't have room in their schedules to take it.

"Because of these barriers, only families of means are likely to seek extracurricular opportunities for their children to develop the critical computer science skills relevant to the emerging job market. Almost everyone else will graduate without them," the authors assert.

With computational thinking, students learn not just how to solve problems, but how to approach problems.

"There has always been a big push in education for problem solving," Krauss said. "Computational thinking is more about problem identification and problem posing. It was around long before computers were. It goes back to deep philosophy and logic. In this book, we are resurrecting things that education used to value and applying them to learning code."

"Computational thinking is the polar opposite of the way most schools operate," Prottsman explained. "Kids learn better when they are exploring and breaking down and reassembling things for themselves. In this book, we help teachers learn how to bring this into their curriculum."

The book distills computation thinking down to four "pillars":

Upon those pillars, the book builds lesson plans and lays out curricula. The book promises teachers:

Computational thinking encourages risk taking. Student are encouraged to try things that might fail and learn from their mistakes. The authors quote a teacher who turned "FAIL" into an acronym for First Attempt In Learning.

If you want to see coding and Computer Science introduced in a school, consider giving Computational Thinking as a gift to a teacher or principal. If they balk and say they don't know anything about computers or coding, share the advice of Seymore Papert, the father of educational computing:

May we all think of computers as mud pies – stuff to think with.

That quote and this book should get you to "yes" with most teachers and principals.