Will Hertling at World Forum 2019.jpg 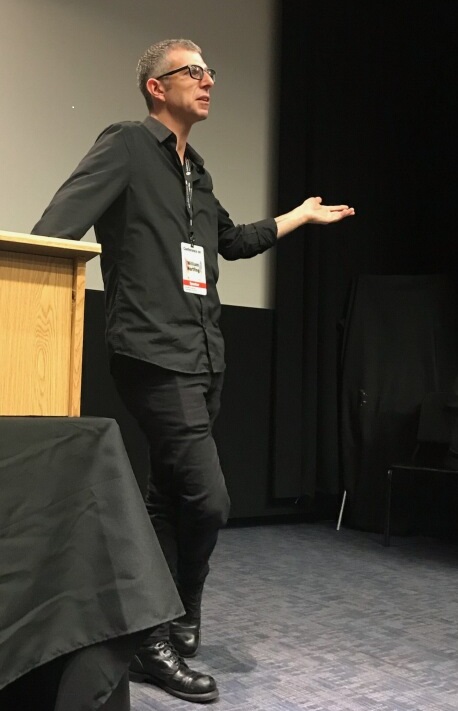 Will Hertling, a 3D printing developer for HP Inc. and an accomplished science fiction author, delivered a message of technological disruption to the 71st annual Conference on World Affairs in Boulder, Colo., in early April 2019. In nine different panel discussions, Hertling spoke about the promise and perils of technological innovations in social networking and Artificial Intelligence (A.I.).

One hundred speakers of diverse backgrounds and expertise, including journalists, scientists, business leaders, politicians, activists, spoke to 60,000 attendees assembled in Boulder and via live streams around the world.

Hertling was selected as much for his near-term science fiction writing as for his cutting-edge software development for HP 3D printing.

Hertling has authored two series of sci-fi books, available on Amazon.com and Audible.com:

In his books, Hertling spins believable, gripping plots out of technology's dual nature. Technology has always been a useful tool and at the same time a instrument for greed, deception, and distruction. At the Conference of World Affairs, Hertling found that audiences appreciated this paradoxical duality.

"There was appreciation of the benefits of disruptive technology as well as concern over negative effects. In general, people seemed to understand both the costs and the benefits of technology, and did not appear to to be predisposed to have a negative view. They saw it as a tool that could be used for good and evil."

Below are trip notes that Hertling prepared for the managers who had supported his participation in the conference.

I attended the Conference on World Affairs in Boulder, Colorado, the week of April 8th.

This conference, which is in its 71st year, is a unique conference that invites a hundred experts with different backgrounds (technologists, scientists, journalists, politicians, educators, writers, and artists) and areas of expertise to participate in over two hundred panels on topics from disruptive technology to global politics to social issues. The conference is attended by a total of 60,000 people, including college students from the University of Colorado, adults from the local community (including a large contingent of retired folks), and remote viewers of the live stream from around the world.

I was invited to speak on nine panels on disruptive technology and do one classroom visit at the University of Colorado based on my background in writing about the effects of current and near-future technology. I spoke about artificial intelligence, social media, data collection and privacy, and scientific accuracy in media. I attended a handful of other panels, and had numerous conversations with other speakers on a variety of topics. Certain themes and ideas came up repeatedly, so rather than organize my notes by panel, I’ve organized them by themes and ideas. Before I get to those ideas, I’ll present a few summary thoughts.

In general, people seemed to have understanding of both benefits and costs, and saw technology as a tool that could be used for good and evil. They did not appear to to be predisposed to have a negative view of tech, with the possible exception of social media and/or device addiction, which was a prevalent and strong concern.

There was tremendous creativity and passion around using technology to provide benefits to society. Whether companies do this as their primary agenda (e.g. provide a benefit to make money) or as a secondary agenda (e.g. provide a benefit to create goodwill with customers), this seems to be increasingly important to be perceived well by the general public.

On the other hand, as there is greater awareness now of some of the pitfalls of technology with more concrete examples of these as compared to the past, there also seems to be higher levels of hostility directed toward companies perceived as only being out to make money. However, as this was my first time attending CWA, I can’t say for sure whether this is a trend over time, or a bias of the conference or geographical region.

Michelle Thaller, Assistant Director of Science for Communications at NASA, spoke about the training that NASA scientists and engineers receive to help them communicate with the public and with politicians.

NASA uses (and Michelle recommends) the Alan Alda Center for Communicating Science to facilitate workshops on science communication for their engineers and scientists.

As a developer, I found this interesting and relevant because we all face challenges with communication between engineers and others:

Speakers and attendees spoke about and generally appreciated that data collection and artificial intelligence is heavily used to improve services, such as maps and directions, search, product listings, and that there are significant benefits to data collection.

One example of a project with considerable social benefit was a centralized service for reporting police misconduct. Currently, each of the 18,000 police precincts in the United States has its own separate mechanism to report and track cases of misconduct, making it extremely difficult to analyze misconduct broadly and identify problematic precincts or officers. A centralized system for reporting and tracking misconduct would lead to substantial improvements.

The Uber racial profiling conversation was a good example of how companies can get involved in important social issues and make significant contributions with only a small incremental effort.

However, speakers and attendees were also concerned about the negative impacts of data collection by companies and governments. The concerns included:

People wanted to know how to get the benefits without all of the negative costs.

AI was another popular discussion topic, and it was often closely related to the topic of data collection, since the two go hand in hand. Speakers and attendees saw myriad benefits to AI, both current and future, including:

The conversation around artificial intelligence also ended up discussing the risks and costs of AI. The costs of AI included:

Speakers and attendees were concerned about the design of social media and other mobile apps that are engineered for user addiction. There was broad recognition that social media apps, which are in theory designed to foster connection and interaction, tend to be problematic, often substituting for actual face-to-face interactions, making people feel worse about themselves by comparison, and can lead to depression, negative self image, and other issues.

How do we find meaning, purpose, and happiness?

Many discussions featured a common theme of understanding what it means to be human and how to find meaning in life. This question came up with we discussed artificial intelligence and the possibility of greatly increased unemployment in the future. How will people find meaning, identify, and purpose if we live in a world without employment? The idea that people will shop, eat, and watch television to find happiness doesn’t work particularly well now, and it certainly doesn’t scale to sixteen hours a day, seven days a week.

The question came up again when we discussed our addiction to social media and the tiny dopamine hits it gives us throughout the day – just enough to keep us clicking away, but not enough to achieve meaningful happiness. We discussed the importance and value of real-world interactions, face-to-face conversation, and pondered how technology might help or hinder us in a post-social-media age.

And the topic came up yet again in a roundabout way as we discussed data collection and privacy, and whether we were happy with the results of giving away our data to corporations, and whether those corporations had our own best interests at heart. That led again to wondering what are our best interests, and what purpose does technology serve for us?

In all of these cases, the conversation turned towards self-actualization, and our ability to know ourselves and our needs. There are many people who, if presented with a world tomorrow in which they didn’t need to work and all of their basic material needs were met, would be perfectly happy – delighted even. There are many people who have a minimal or healthy relationship with social media, who don’t use it at all, or use it just enough to connect with people in a meaningful way.

However, most people don’t fall into the category of being self-actualized, and they don’t find meaning through their personal action. This suggests they will be increasingly discontented given current trends in technology. Several speakers talked about the increasing social disruption (political antagonism, violence, backlash against social progress) as being indicators of this problem in our society today.

Believe you can change the world

It can seem daunting and audacious to imagine trying to solve this problem, let alone trying to see what your company's role might be. However, it is a very significant issue and will become even more so over the next decade. Whether to cultivate goodwill with the global community we operate in, or simply to ensure that we continue to exist in a world that we all can effectively do business in, we should be on the lookout for opportunities to address this challenge, whether it is lending aid and technology to other mission-driven organizations, or taking a more strategic leadership role with other tech companies in tackling how technology enables people to find meaning, purpose and happiness.