Not coding makes me cranky (Fight for the right to code) 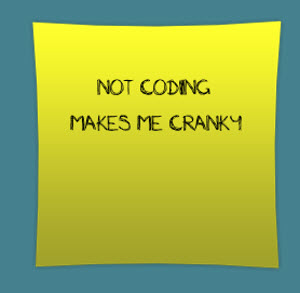 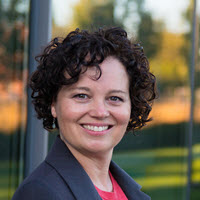 I get so much enjoyment from solving problems and writing code. When I am deep into a challenge, with the full context held in my mind, the code begins to flow. When I get “in the zone” for hours, I am not only highly productive, I am also very satisfied with my work.

Sadly, I am often frustrated by interruptions.

One day, when a string of interruptions left me staring blankly at the screen trying to figure out where I left off, I grabbed a pen and wrote, “Not coding makes me cranky.”

As patterns emerged, I began to seriously analyze the interruptions and how switching contexts impacted my coding productivity. After a few weeks, I had created not an app, but rather a Powerpoint slide deck titled:

Fight for the Right to Code

I presented it at a Tech Talk and found I am not the only one who gets cranky. Interruptions and irritation are almost universal. 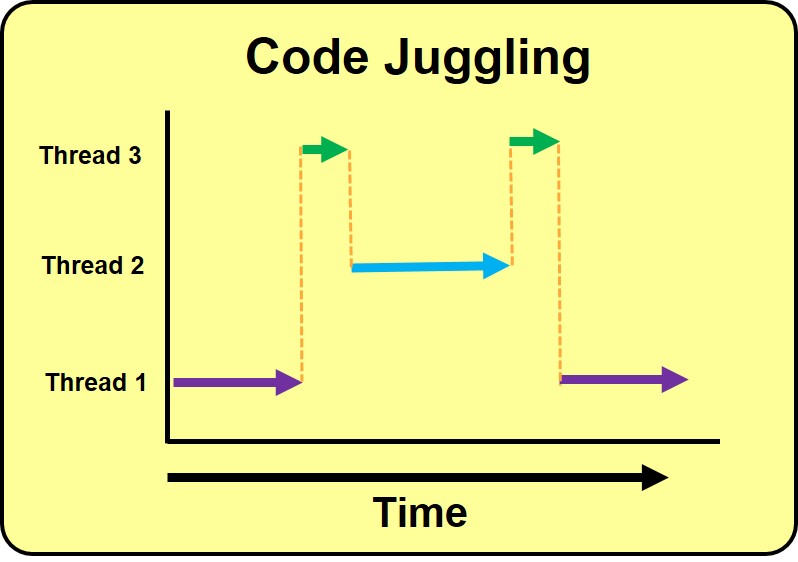 Coding is by nature interrupt driven. It has been from the start. (Anyone remember batch processing on tape?) You work on one thread: testing, creating, refining, and deploying until you are satisfied. Then you switch to another thread, hoping that the first thread is complete, but knowing that it may come back to you in the future in the form of a defect or refactor need.

We all end up juggling code. It’s in the nature of what we do.

One study, which first appeared in Game Developer magazine in 2013 under the title Programmer, Interrupted, looked at sub-vocal utterances during a programming task to find different levels of memory load during programming tasks. It showed that when you have a lot in your mind – a high memory state – it takes a long time to get everything back after an interruption.

I turned to Reddit to see what kind of tips and tools I could use to fend off interruptions. I found two key points:

As a technologist, I had to apply technology to the problem. I found this Interrupt Handler:

If only interrupt handling for humans was so simple. We don’t (yet) have dedicated software for handling human interrupts.

Here are four less technical things you can do to take control of interruptions:

Email – Don’t get sucked in 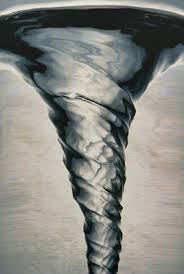 My biggest source of interruptions is email. Emails pop up all day every day, tugging for attention. This pits me against myself. I like to keep my inbox clean. To take control of email interruptions, I had to let go of the dream of an empty inbox.

Here are ways to cut time on email: 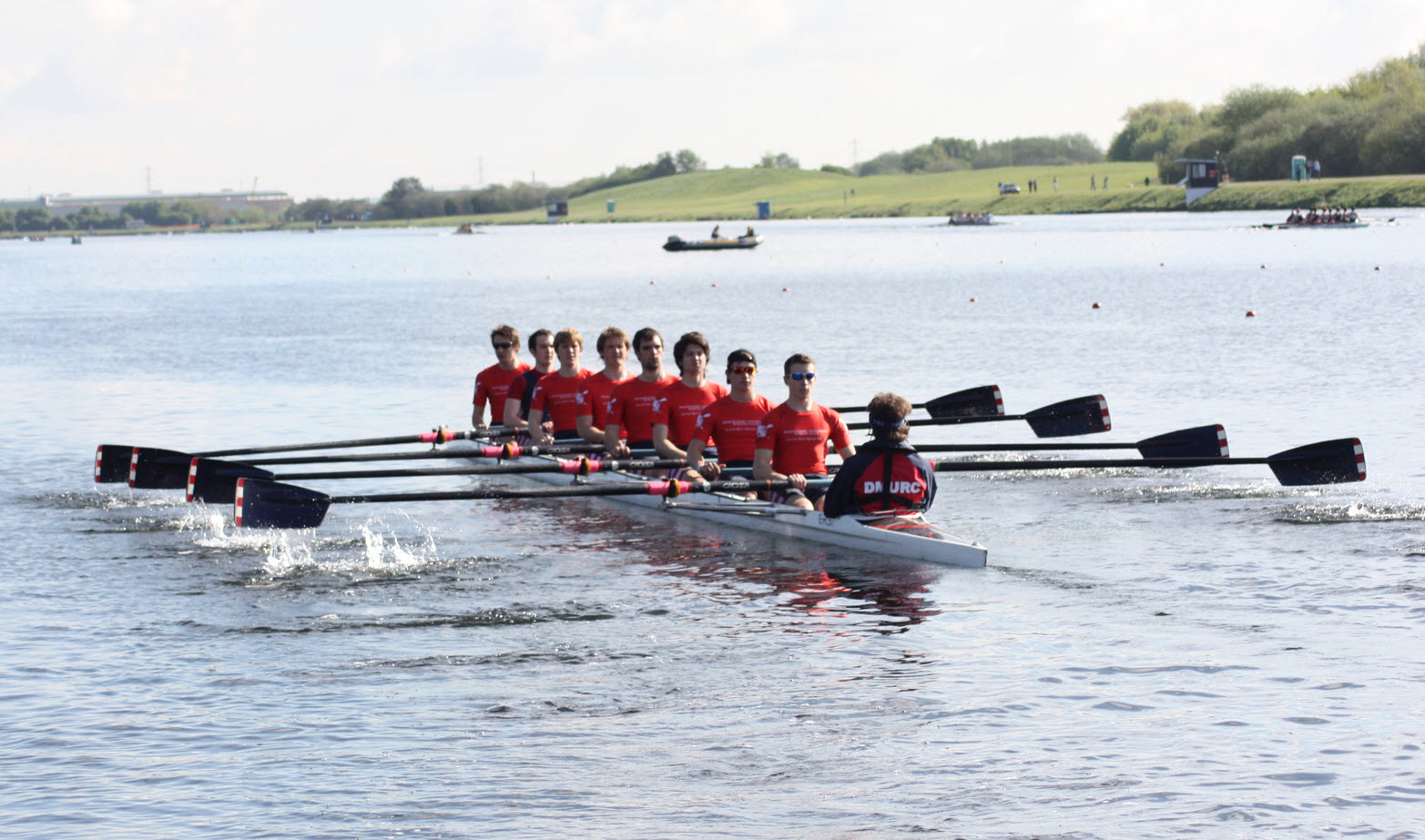 I highly recommend using a team communication tool –  Hipchat, Slack, or Campfire – even though they are a source of constant interruptions. These types of interruptions are more relevant for the team than email because they surface immediate productivity blockages like, “Who has the test thing-a-ma-jigger?” It may be disruptive, but this is appropriate disruption. It keeps a team connected in a way that can be highly productive. I would still be cautious and sometimes turn off my team communication app when focus is crucial.

To stay productive with these new always-on tools, we need to develop a culture that recognizes that not everyone needs to know everything. When you need to seclude yourself to focus on your code, you should be able to check out, but remember to notify others so they won’t worry. You might send a message like, “I’m going solo for the next two hours. I will check messages before I leave.”

Since I wrote that yellow sticky note to myself, I have adopted these behaviors for my own work. I hope these healthy patterns will help you avoid context switching and the damage it does to your productivity and work satisfaction. 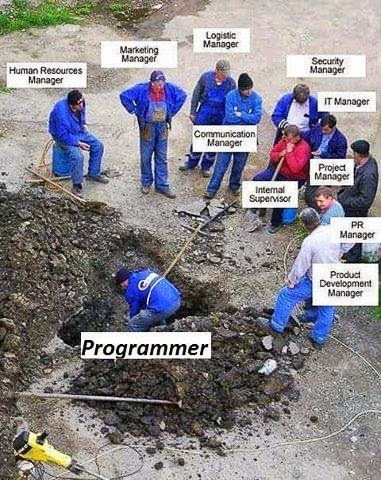 That last point refers to a clever photo that has been going around on programming forums and tweets. (Who knows who to credit and thank for the original?) It shows a programmer digging a hole, working hard, doing his job. He is surrounded by a supervisor, project manager, product development manager, IT manager, marketing manager. You get the idea.

Each one of those people has an interest in the digger’s progress, but if each interrupts the programmer, no digging will get done. So what’s a programmer to do?

Try pulling interrupters down into the hole. Let them help move some dirt. Ask them to pair with you on a story. Programmers need to be help interrupters understand the impact of disruptions. Then, perhaps, they will think twice before they interrupt.

Here are some of the best studies and resources I found on taking control of interruptions:

Here is another good analysis of the timeless tug-of-war between programmers and managers. It is a post by Paul Graham titled, "Maker's Schedule, Manager's Schedule." (http://paulgraham.com/makersschedule.html )
TheSkipper

Have you ever had the need for technical meetings? Those where you discuss changes that the team should be aware of which might impact their daily coding. I've been seeing that going on and they usually fall into the "this could have been an email" category. I wonder how you deal with that...
feliperoos

Great post. I think that Cal Newport does a really good job detailing just how bad interruptions are in his recent book Deep Work. I wish that we could get every software manager on the planet to read it.
taborkelly