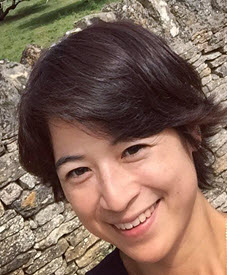 "Getting people to download your app is only a small part of the battle. The biggest challenge is keeping them engaged and creating a habit that makes them return often."

As Mei and her team looked for ways to keep users using, Mei learned of HP's Mobile Print SDK, which puts a print button in the app so users can print their photo creations at home. (Editor's note: The Mobile Print SDK was deprecated in 2017 when the Android Oreo operating system was released with a built-in print service. Now any developer - Android or iOS - can easily add a PRINT button to their app.)

“Prior to this year, PicCollage was focused more on teens and millennials, who we thought were not interested in physical product, but people are going back to the physical space. Teens are rediscovering Polaroids, postcards in the mail, and retro photos. They are printing photos with retro effects that make it look like they were taken in the 1970s. Teens still decorate their bedrooms, and creating your own poster means a lot more than a commercial poster. We are getting Moms using PicCollage to take all their photos and prepare them for their scrap books. This is a space with huge potential.”

Some cautioned against adding at-home printing to a mobile app. It seemed to compete with the company's print-and-ship business -- the traditional way to monetize a free app. (PicCollage users get the app for free, but they pay if they want their collage printed on photo paper, as photobooks, on mugs, cell phone cases and dozens of other consumer products. The products arrive by mail days after they were ordered.)

Nevertheless, Mei decided to experiment with mobile printing at home. It took only about 20 minutes for her developers to integrate it using HP's SDK. They tucked the "Print At Home" button on a second-level page. No monkeying around with the home page for something that might not work out. 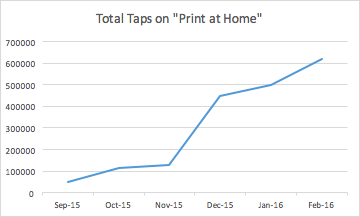 User response was immediate and surprising.

"We had 1,800 prints on the very first day," Mei recalled. "When we moved the print button to the first level, printing almost doubled. The holidays were huge. Our users have printed more than 1 million prints in six months. It's exciting and very encouraging! We still have work to do to really pin engagement and retention directly to print, but we're making headway."

(Editor's update Nov. 2017): Photo printing continues to be strong at PicCollage. Just 18 months after the Print button was introduced, PicCollage passed 5 million prints. After 2 years print blew past 7 million and is expect to hit 10 million in early 2018. That's about 20,000 holdable, shareable, enduring collages printed each day.)

Instead of sabotaging their print-and-ship business, at-home printing appears to have boosted orders delivered to the doorstep.

"Printing from home is underrated because it's not directly revenue-generating, but after making the Print At Home button available to users, we found that people got in the habit of printing. That repeated behavior can be very valuable in the long run. People who see the results of a printed collage from their home printer might decide to commit to purchasing a photo book or a phone case."

PicCollage developers are looking for more ways to leverage print to increase monetization.

"We are toying with a new push-notification system powered by Kite, our Print & Ship partners. The system will be able to target our Print & Ship marketing at certain users – for example those users who have tapped the Print at Home button. That might bring some new and interesting results."

The PicCollage experience is not unique. HP has fresh metrics from several apps that integrated the Mobile Print SDK.

“We never expected to hit a million prints in 6 months," Mei said. "We are on a pace to hit 2 million by the end of the summer. Print at Home has become a useful tool in our retention and brand extension strategy.”