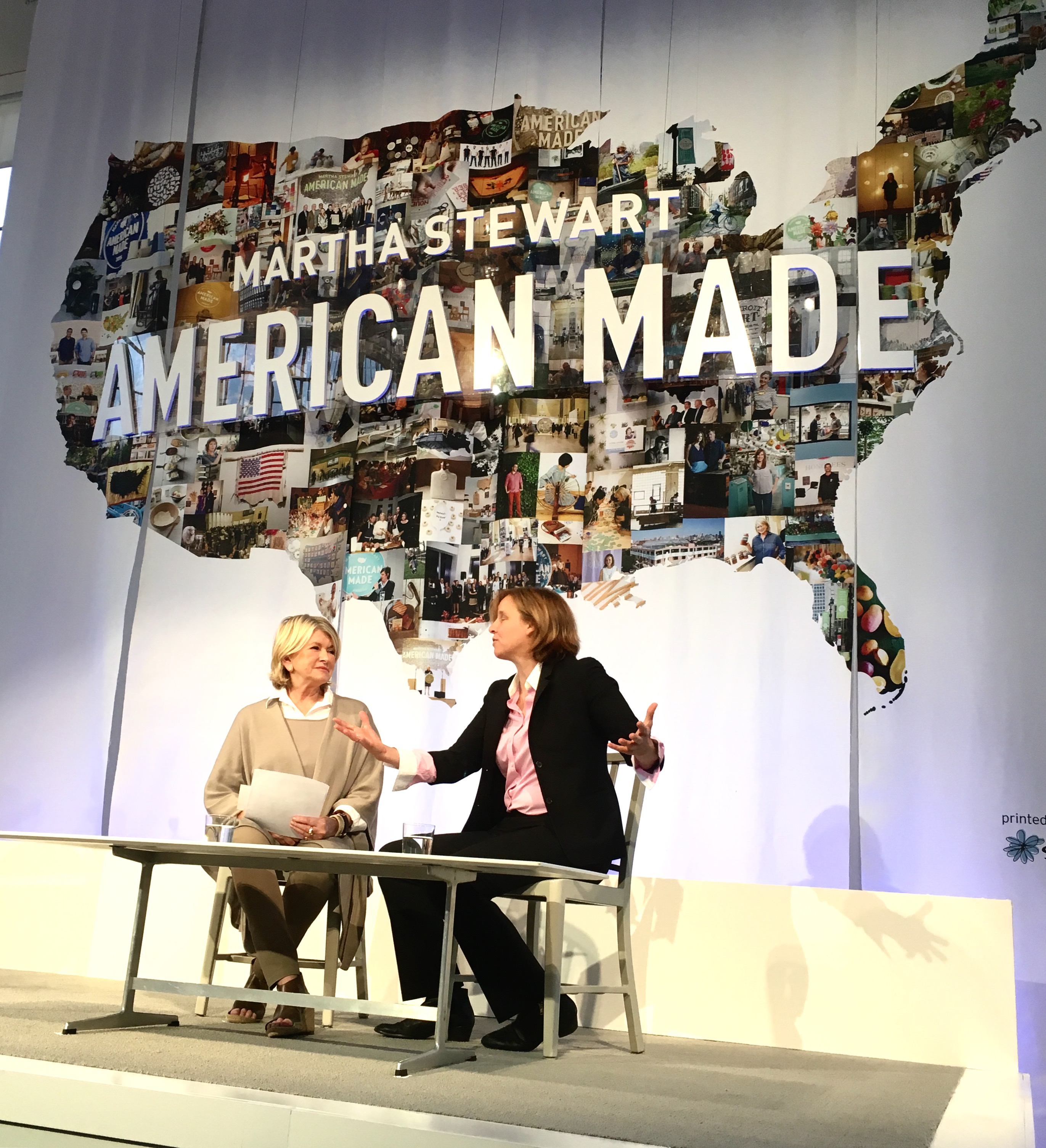 “Are we hacking them as much as they are hacking us?” Stewart asked.

“No comment,” Smith said diplomatically, eliciting laughter from the hundreds of makers gathered for the celebration of American Made food, technology, design and style. Smith did offer, “This is the challenge of our day. There are extraordinary people working on it, both inside and outside of government. It’s something we have to be very vigilant about and continue to get stronger.”

In 2014, Smith, a mechanical engineer by training, was appointed by President Obama to the position of CTO in the Office of Science and Technology Policy. Smith made her mark in business at Google, which she joined in 2003 when the company was comparatively small, with just over 1,000 employees. (Now it is up to 60,000.)

“I took a maternity leave once, and the company doubled!” she recounted.

As Vice President of New Business Development, Smith led the acquisition of major platforms: Google Earth, Google Maps, and the photo app Picasa, which is being rolled into Google Photos.

During her tenure as CTO, Smith has championed women in technology. She participated in Girls Who Code events. The international Hour of Code is held every December to honor the pioneering contributions of two women who played a role in the creation of computer technology: Ada Lovelace, who invented programming, and Grace Hopper, who pioneered coding languages. Both were born in December.

For a recent Hour of Code, Smith arranged for President Obama to serve as Coder-in-Chief and meet children who are learning to code. The event was held not long after British Prince William and his wife, Catherine “Kate” Middleton, made their first visit to America. Smith gave Obama some gender bending history about coding and secret codes from WWII.

“Mr. President,” Smith said, as they walked to an Hour of Code event, “Did you know there is a connection between what you and I are about to do, and Prince William and Kate? Kate’s grandmother was one of the code breakers in World War II who broke the German’s Enigma code. Cracking the code shortened the war by two years saved 11 million people.”

In fact, she told the president, two-thirds of the code breakers were women, a fact that wasn’t apparent to him in the movie The Imitation Game. The 2014 film focused on British mathematician Alan Turing, who built one of the first computing machines in order to crack the Nazi’s uncrackable code. The role of women in the history in coding is now mostly forgotten.

“Sadly, it is 25-to-1 boy visitors to girl visitors at the computer museum because we think computers are for boys.”

Martha Stewart added, “Girls Who Code will change that.”

Martha Stewart established the American Made event in 2012 to find and recognize Americans who are successfully, creatively creating products and making opportunities in the United States.

“Is it true that there are 600,000 open tech position in the United States?” she asked Smith. “Is that accurate?”

“Companies are starving for tech talent,” Smith said. “There are 5.5 million jobs open overall. The largest chunk of that is in the IT sector. That’s not all coding. It’s for people who are familiar with digital things. It can be front-end or back-end coders. It might be UI designers, or design team leaders, or digital marketing, social media communicators or product managers. All of these interesting jobs have some digital aspect with the physical products that they are making. Really, every company in the country needs those people, not just the tech sector.”

To meet that demand, the Obama administration created the $150 million TechHire Initiative, to expand local tech sectors by building tech talent pipelines in communities across the country. However, that initiative alone can’t meet the demand.

“We have as many people as we can take for 2-year and 4-year degrees, and we still need more,” she said. “There’s a great innovation: Code Bootcamps. You can go to a Code Bootcamp for 3 months and really train and apprentice in writing code.”

Martha Stewart scheduled her American Made summit in conjunction with National Manufacturing Day, the first Friday in October. In her introduction, Stewart praised President Obama for his Nation of Makers Initiative, which works to give students, entrepreneurs and all Americans access to new technology so they can design and build anything they can dream.

“He has developed a wide range of initiatives that support local innovation, opportunity creation, and synergistic solution making.”

When asked about the importance of preserving art programs, Smith said. “We talk about STEM – Science, Technology, and Math – and we can add A for Art to make STEAM. The universe doesn’t separate all these subjects. We are the one that have these weird ideas – a lot of stereotypes – that there are tech people and non-tech people.”

“It’s really how we teach. We want teaching to be like PE, and art and music. You should teach math and science that way.”

She plugged Active Learning Day (Oct. 25), when STEM educators at all grade levels are encouraged to spend at least 10 minutes using an active learning technique in their classrooms.

As CTO, Megan works closely with the National Aeronautics and Space Administration (NASA) on plans for a manned flight to the planet Mars. Interplanetary travel is one of her main objectives. She said the government welcomes private ventures by entrepreneurs like Elon Musk of SpaceX.

“Elon Musk has a great quote,” she said. “He says he wants to die on Mars…just not on impact.” 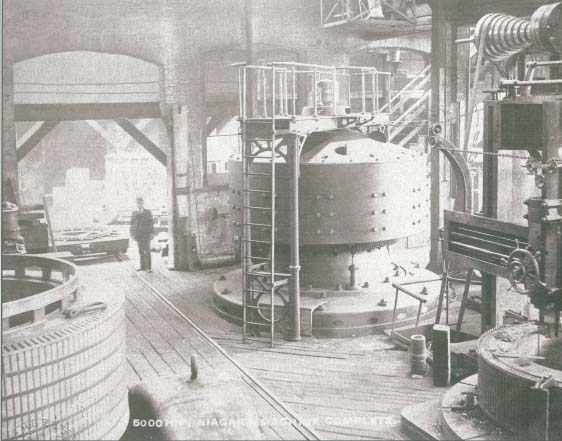 In her years at Google, Smith led the opening of offices in Africa. There she saw the power of technology to serve the betterment of mankind – Technology as a Service. As CTO, she focuses on technology’s potential to change lives for the better.

“I am from Buffalo, New York, near Niagara Falls,” Smith said. Niagara Falls is the largest, most powerful waterfall in North America, and its energy was harnessed in the earliest large-scale deployment of hydro-electric power.

“Nicola Tesla used Niagara falls to light Buffalo to demonstrate modern electricity. Now every city has electricity. Technology really is part of service. We can invent and create the world that we want.” 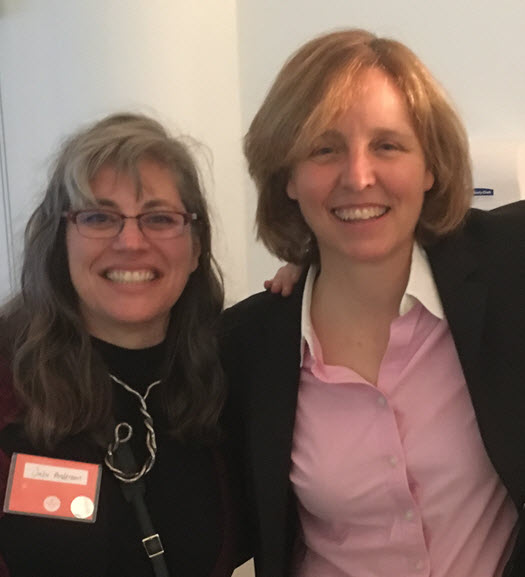 I was thrilled to attend the American Made summit, and truly appreciated the warm welcome from the amazing people at Martha Stewart. I even got a tour of their workshops and test kitchens. I’ve been to many a start-up conference in my time, and this one was fantastic. It was well organized and visually rich.

My inner geek-girl excitement came bubbling to the surface when I met Megan in person. I share her passion for encouraging hands on, maker-based entrepreneur and education initiatives that are rooted in STEM and STEAM. I also saw how creative engineers are embracing the maker culture to generate innovation by mentoring, learning and designing new products and solutions.

HP Inc.’s history and culture is based on creative people using technology to “make things real.” We are opening up our APIs to new and existing technology, and using our internal maker spaces on HP campuses to teach, test and learn. We understand that creative makers drive innovation and create new products to solve problems for customers, and Shane Wall, HP Inc.’s CTO, is very focused on makers and developers as innovators.

“From where I work at HP,” said Wall, “the next Industrial Revolution is well underway, and 2030 will look a lot like Iron Man’s basement. It’s for the Maker community and entrepreneurial minds that we designed our first immersive computing platform Sprout, where we tried to imagine a better experience for creators.”

Sprout is opening up APIs for hardware and software here on hp.io, and we are excited to see what developers will do to help us design the future.

Other popular posts on the HP Dev Portal