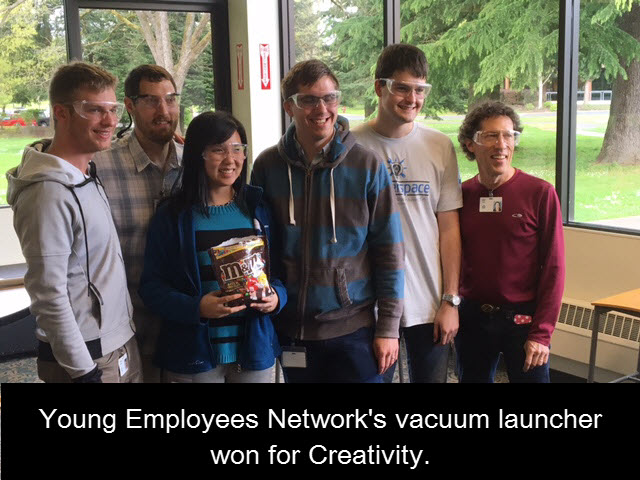 At the first HP Corvallis MakerSpace M&M launcher competition, the Young Employees Network took top honors for Creativity, and maker Tom Saksa won the prize for distance and accuracy. However, the real action didn’t start until after the official competition ended.

The Young Employees Network came with a 20-foot-long vacuum tube M&M accelerator, made of PVC pipe. Tom Saksa, the Corvallis site’s resident Mr. Wizard, took the idea of a pea shooter and scaled it up to M&M proportions. He glued a 4-foot piece of PVC pipe to an air chamber that had a pressure release button. He pressurized the chamber with a tire pump. Tom's mini air cannon won for distance and accuracy, but he was not satisfied with the win.

The problem was that the contest was held indoors - inside the cafeteria with its modest but limiting 10-foot ceiling. Organizers Julie Anderson, Larry Mull, and Tracy Lang thought the lunchroom offered plenty of space – just push the tables and chairs back along the north wall where HP CEO Dion had stood a few days before, and voila! you have a 100-foot, candy crushing target range. However, Tom’s bicycle-pump-powered M&M air rifle was firing candy projectiles clean across the room. They were smacking against the windows and thwanging off the radiator. 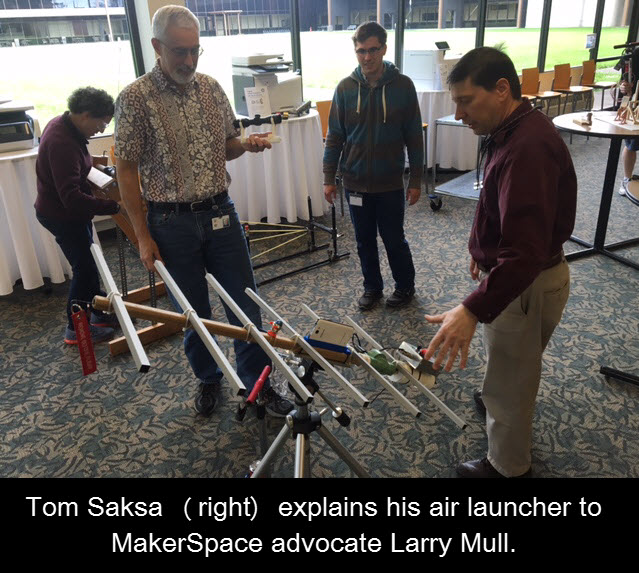 After the contest was over Tom picked up his candy cannon and headed out a side door for a little al fresco action.

Pointing his launcher’s 4-foot muzzle up toward the sky at a 45-degree, he dropped an M&M down the shaft, then – pumping vigorously on an ordinary bicycle tire pump – loaded it up with 60 pounds of pressure.

“Fire in the hole!” Tom cried to a cadre of supporters who were fanned out 30, 40, and 50 yards in front of him, using the west wall of Building 2 as a 3-story backdrop.

Tom pushed the trigger button. The cannon thoonked, and everyone turned their heads to listen for the impact of a high-flying treat.

Tom reloaded. “Fire in the hole!”

Then Tom made a shrewd guess – perhaps the M&M’s were going farther than anyone, including him, had guessed.

For his next shot, he backed the pressure down to a puny 20 pounds per square inch – scarcely more than an atmosphere of pressure.

Ears turned toward the heavens.

A metallic ding echoed down from a panel high on the eaves of Building 2.

Tom’s hypothesis was validated. The first candy-coated rounds had landed on the roof or sailed clear over building! The site crows were in for a treat.

The eave of Building 2 – 250 feet away and 30 feet up  – was not a precisely, measured distance (which Tom, as an engineer, would have preferred – numbers being the essence of engineering). However, the superiority of his launcher for distance had been clearly established. He picked it up and stepped back inside the dining hall to refine his creation’s accuracy.

Not a single launcher had put an M&M into the bull's-eye during the competition, even though the Young Employee's Network had outfitted their vacuum accelerator with a laser sight. Tom wanted a few more shots at the bull's-eye. The target – a portable dry-erase easel with not one, but two presentation packs on it – was positioned a mere 10 feet from the muzzle. Tom pump-pump-pumped his candy cannon back up to a manly 60 psi.

Thoonk-WHACK!!! The impact was instantaneous.

A crater of ripped paper appeared to the right of the bull's-eye. Unsatisfactory.

Thoonk-WHACK!!! Another hole appeared, this time to the left of the bull's-eye.

Tom might have reloaded for a final shot to nail the bull's-eye, but closer inspection of the target revealed a surprise.

The M&M’s were traveling so fast that they were not just piercing the sheet of target paper. They were also penetrating the 2-dozen sheets behind it, plus the cardboard backing of the front pack, plus more than a dozen sheets of the second pack. In fact, had the second pack not been there, the whiteboard itself might have been left with a pair of divots to commemorate the First M&M Launcher Competition of the HP Corvallis MakerSpace.

The Make It Real (Cheesey) Awards 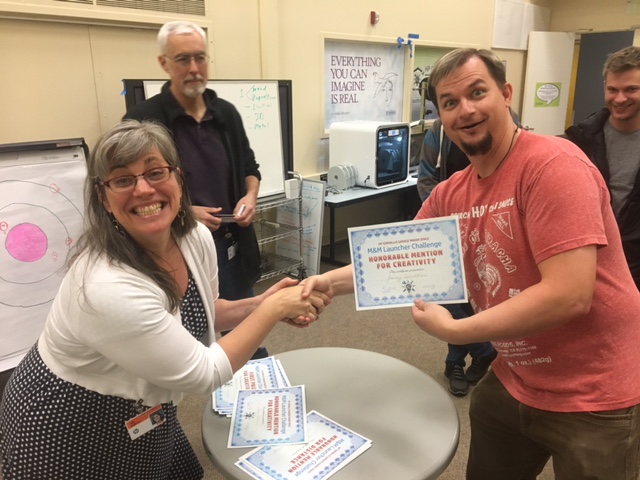 Jeremy Donaldson accepts an Hon. Mention for Creativity
(He burned out his rotary launcher the night before the competition!) 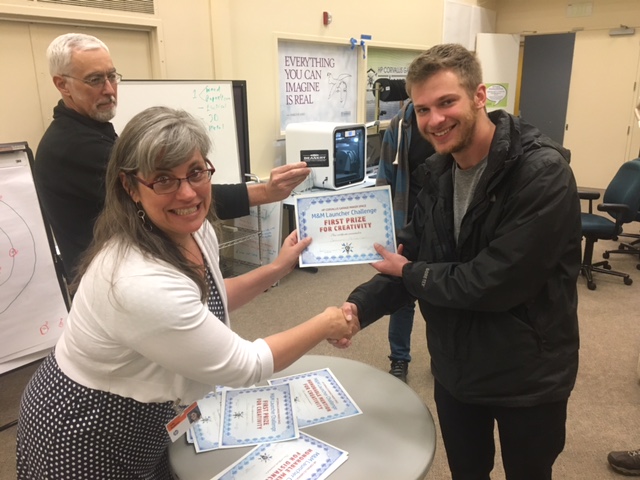 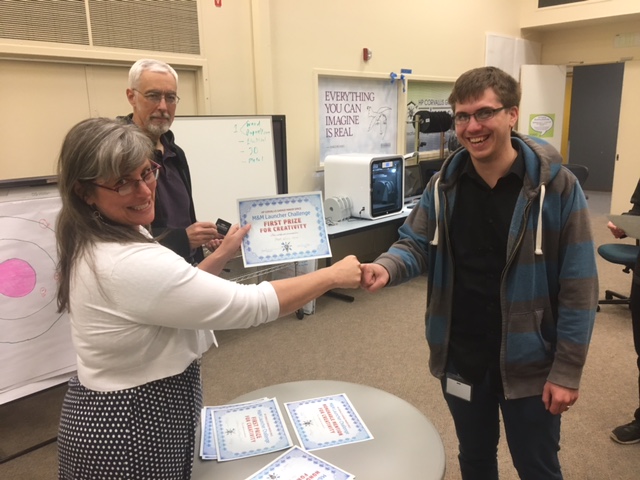 YEN's Matt Olson came for the certificate but was more jazzed to get the coffee card. 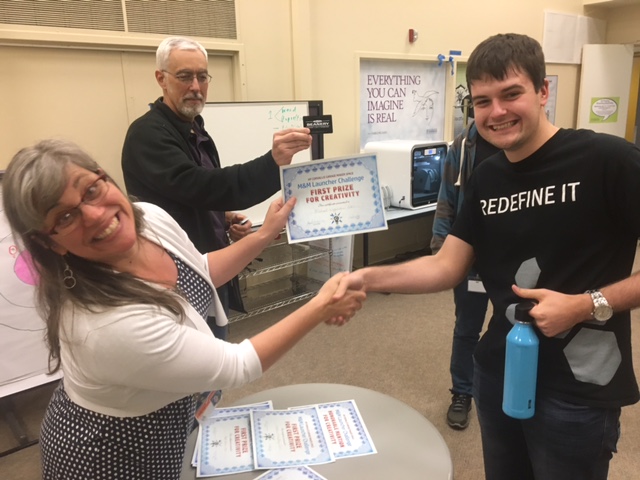 Michael Woffendin promised to deliver $60 of coffee cards to YEN.
(If you didn't get yours, see Michael.)