As jobs progress from submission through print completion multiple contexts of that job are spawned within the PrintOS Jobs application.

In a simple configuration a Job will be submitted to a DFE, that job will route to a single Press, and a Print Run will be printed.  This results in a job with a single DFE context, Press context and Print Run context. 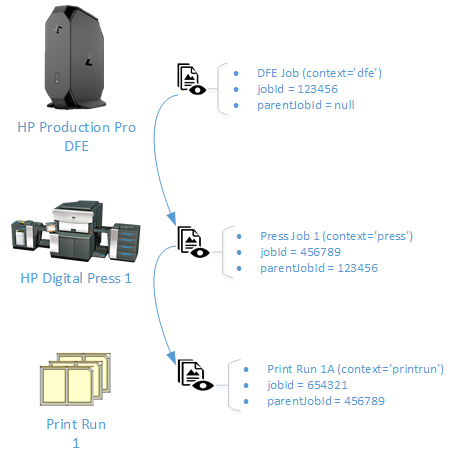 However, due to the potentially complex nature of DFEs and presses there is not always a 1 to 1 relationship between these job contexts.  For example:

The graphic below shows an example where a single DFE job was copied and sent to another attached press.  One press job was printed a single time creating a single print run, and the other press job was re-printed once creating 2 print runs. 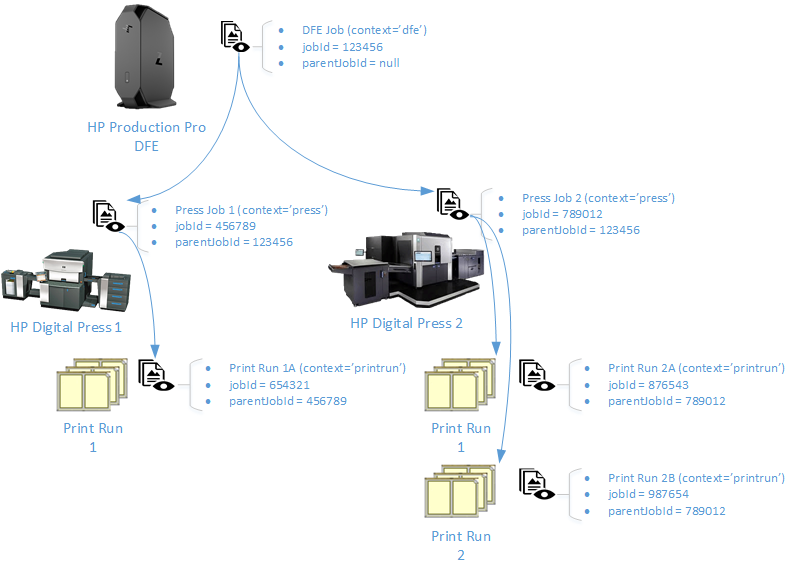 Linking the contexts of a job

Certain job properties will exist across each context of a job.  For example jobName will be the same for dfe, press and printrun contexts of a job.  However, jobName is not a unique value among jobs.  Multiple DFE jobs can have the same jobName value, so you must ensure that jobs have unique names on the DFE if using this method.

The historic context is very similar to the near-real time printrun context except that the data for these print attempts are pulled directly from the press.   Because of this there is no linkage between a historic print attempt and the parent press/dfe job (no parentJobId ).   The only current method of linking historic print attempt data with a dfe job is through the jobName property which is not necessarily unique as outlined above.