The Omnicept system is a wheel-and-spoke architecture with two main components. 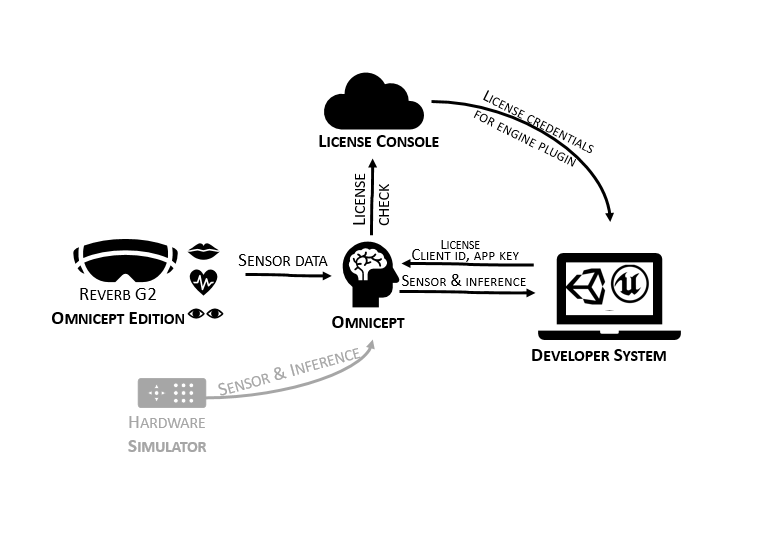 To access Omnicept data, you will require an Omnicept license.   Licenses are acquired through the Developer's Console.   An account must be created on the Developer's Console to create the client and access keys credentials used in the Omnicept enabled solution.  This client and access key confirms with the Omnicept service that the runtime is licensed to get inference engine information.

The Omnicept runtime is a system designed to connect sensors to applications running on a single PC. The runtime transports compact datagrams between Omnicept client processes. The runtime also hosts internal modules (on Windows, .dll files) that read and process incoming sensor data.

From Omnicept 1.11 clients have the possibility to choose which messages they receive and the version of these messages.  To do so a Subscription List containing all the desired messages and versions is required.

Clients included in the SDK

The Reverb G2 Omnicept Edition has a set of sensors that are exposed through the Omnicept SDK. In order to understand better the possibilities of integrating these sensors, we will review each sensor description and their outputs.

Cameras pointing at the user's left and right eye. The eye camera and eye-tracking on the HP Reverb G2 Omnicept edition is powered by Tobii

PPG (photoplethysmogram) sensor detects the blood volume changes in the microvascular bed of tissue using light signals that reflect onto the skin. The PPG sensor is located on the forehead, represented by two green LEDs.   HP does not provide access to the raw PPG data.  Why?

A camera located on the bottom of the headset pointing trought the mouth of the user.

+X when the user turns their head to the right

+Y when the user looks downwards

+Z when the user tilts their head to the right

This is NOT the same IMU as measured from the headset for SLAM calculations.  This is the IMU associated with the sensor board near the heart rate sensor.

Interested in the research that went into the cognitive load algorithm?  Click Research in the menu above to access the abstract, whitepaper and even a sampling of the dataset!

A user’s cognitive load is the mental effort associated with performing a task or engaging in a learning process. Real-time biometric indicators of cognitive load are sourced from Omnicept sensor data for analysis, yielding a numerical estimate of cognitive load as a continuous value ranging from 0.0 to 1.0.

The Cognitive Load  prediction is a centered, normalized value, with Standard Deviation (Uncertainy) describing the margin of error. For example, if the Cognitive Load is 0.73 and Standard Deviation is +/- 0.05, the numerical estimate of a user’s mental effort, accounting for prediction error, lies between 0.68 and 0.78. In most cases, using the Cognitive Load value directly is appropriate for developing software to predict a user’s mental effort, while the margin of error around the prediction (i.e. Standard Deviation) may be used to assess statistical uncertainty of the model prediction. If standard deviation is too large over a period of time, an error should be reported to the participant or to the test operator for correction and troubleshooting (adjustment of the face mask, or other remediation) before proceeding.

Cognitive Load starts reporting within 45 seconds from the first time Omnicept receives eye-tracking information. Prior to this time, no value or 0 is sent from the cognitive load message.  If biometric sensor data is lost for more than 5 seconds, such as when a user takes off the headset, reporting is stopped and the model will re-initialize the next time biometric sensor data becomes available.

Design Guideline:  You could introduce the app during the first minute while the cognitive load algorithm calibrates to the user.  Do note, the user may reach this amount of time before even opening the app (i.e. as they navigate and open the app as long if they did this navigation with the headset on).