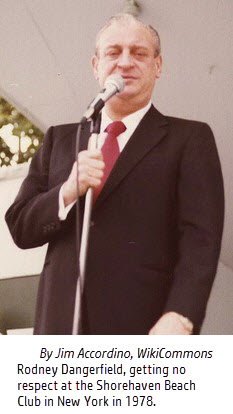 Jacob Cohen got no respect as a comedian, so after years of struggling, he quit and went to work as a salesman. When he tired of that, he returned to showbiz with a new schtick and a new name: Rodney Dangerfield. He turned that lack of respect into one of his best comedy schticks.

Since the dawn of the computer age, futurists and prognosticators have been forecasting the demise and deprecation of paper. Every advance in screen technology enables new paperless options, triggering yet another round of predictions: “Paper's going away. Paper's go away.”

Printers just aren't sexy tech, like smart watches, drones and the next iAnything. Nobody lines up for days in advance to buy the newest printer. The Consumer Electronics Show doesn’t pack ‘em in to see the hottest new features in inkjet printing. Nobody raves. Nobody touts. Nobody cares. And nobody notices...printers are selling like cheeseburgers.

In 2014, more than 100 million inkjet and laser printers worth nearly $50 billion were sold worldwide. That gives you an installed printer base of about half a billion (with a “b”) endpoints. In a world where screens flicker everywhere, people still find practical uses for the printed page. Paper is the durable, portable, foldable, sharable media that doesn't require batteries. Paper endures.

Milestones coming faster
The HP site in Boise, Idaho is the headquarters for LaserJet printing. By coincidence I was there in 2006 when then CEO Mark Hurd visited to celebrate the landmark sale of the 100 millionth HP LaserJet printer. It took 22 years (1984 to 2006) to sell 100 million LaserJets, which are the more expensive office printers. A couple years later, Apple introduced the iPad and the tech prognosticators once again opined that tablets were going to displace not only paper, but also laptops. Everyone expected printer sales to slump. After all, "paper's going away," right? But guess what. The next 100 million LaserJets was sold in just 7 years. By now HP has undoubtedly passed 300 million LaserJets.

The global Covid-19 pandemic in 2020-21 closed offices around the world, so that certainly crimped office printer and toner sales. However, sales of HP's inkjet printers - ideal for home printing for work and school - held up quite nicely. Turns out kids seem to engage paper as a more tangible way to learn. Hybrid learning - combining screens and paper - seems to work best.

Printing on paper may not be sexy, but it is still downright practical for a lot of situations. Mobile printing offers interesting new possibilities as mobile apps and stationary printers work together in new ways. Apple worked with HP from the beginning to dial in AirPrint for its mobile devices. Android took longer, but HP contributed a print service that comes as standard equipment with every Android release since Oreo in 2017. Now any app can easily give users a Print button.