Collaboration the name of the game at university's first hackathon: QuackHack

Nicholas Capaldini, a junior at the University of Oregon, walked into the university’s first hackathon armed with three things:

“I’m majoring in product design, so to me coding seems like magic,” he said. “But I always wanted to make a board game. As a product design major, it would be good to have my own board game in my portfolio. It will be good to show if I ever apply to a game company like Hasbro. Having an actual board game puts me ahead of all the other applicants.”

Feeling like a duck out of water, Nick walked into the university’s first hackathon – called QuackHack – put on by Major League Hacking (mlh.org). On Friday evening, he stood up in front of about 100 students and pitched his idea for a king-of-the-hill board game with six hills. The first player to claim four hills wins.

After all the product pitches on Friday evening, Nick was joined by another product designer, Michael Muir, and three computer science coders:  Adam Carlton, Molly Steelhammer, and Alex Lee. They joined forces as an unnamed team, excited to collaborate on Nick’s unnamed game. 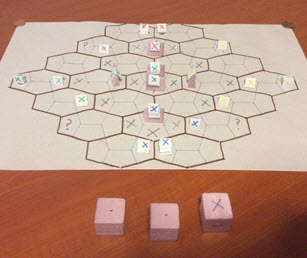 With the teams formed, Day 1 of the QuackHack ended, and Nick went home and got busy.

“One of the mentors at the event told me on Friday that if you really want to win, you need to walk in with a prototype on Saturday morning.”

So Nick stayed up until 5 a.m. creating a fully functioning prototype of his game out of paper. He also printed out copies of the rules of the game. A key part of making the game would be playing the game.

After a pre-dawn catnap, Nick collected his game board sketch and paper playing pieces and headed to QuackHack Day 2 to show his new teammates.

“Working with the coders was very interesting,” he said. “I’m used to being surrounded by right-brained people. The coders are all very left-brained. For me, what the coders do is amazing. It’s like magic. But for them, that fact that I could make a working prototype overnight was crazy. There was a nice mutual respect. Our strengths balanced out.”

The team started by playing the game with five groups – five impromptu focus groups – to let them see the game in action. They watched the players, talked about the rules, and asked what the game should be called. Someone said Nick’s geometric pieces looked like viruses, and the game got a name: Virus. 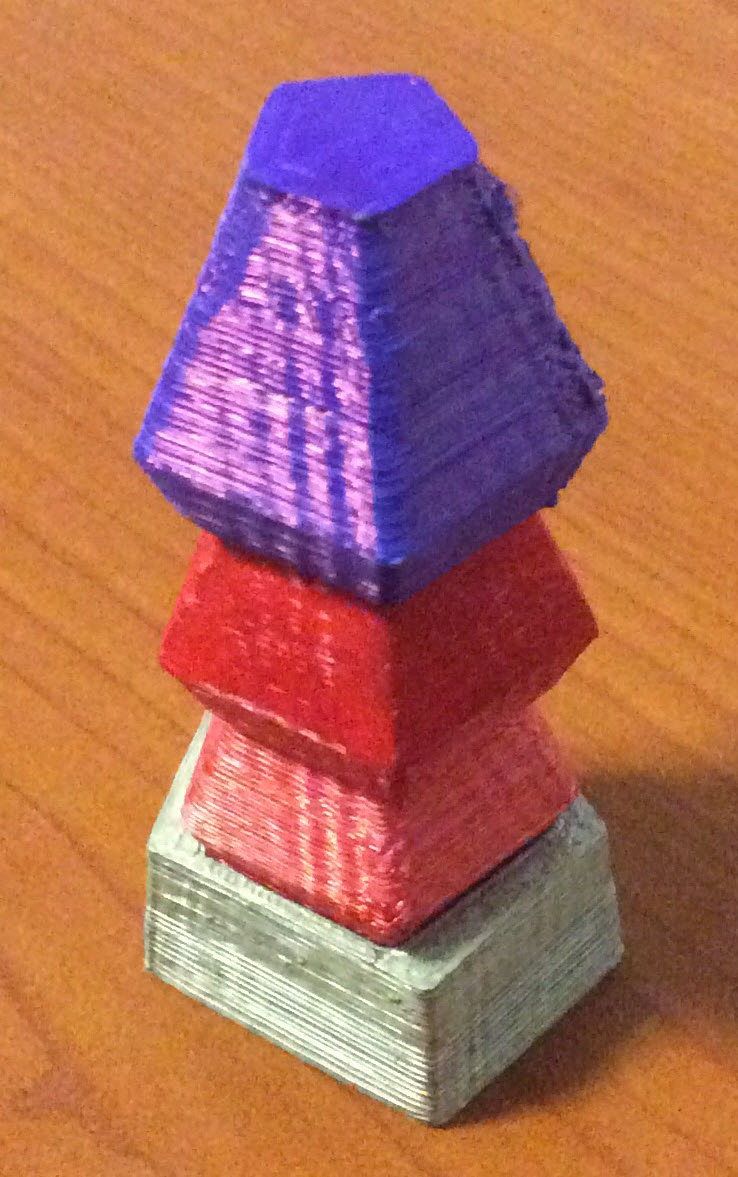 Once the concept was refined, Alex, Molly, and Adam considered Nick’s prototype and the resources provided at QuackHack. HP had contributed a top-of-the-line color desktop printer. There was also HP’s newest gee-whiz product — the Sprout by HP — a combination PC, 3D scanner, and projector. And there was a 3D printer.

The coders could have used the Sprout to collaborate on creating 3D player pieces, but they agreed that Nick’s paper prototypes were good enough. They went straight to rendering the player pieces in 3D, with Michael inputting into Autodesk's Fusion software. Then they shipped the files to the 3D printer. After a couple of false starts, Nick stood beside the 3D printer and watched his game become real.

A board game requires a board, so Nick laid out the field of play using Adobe Illustrator. He printed it on 11-by-17-inch ledger paper from the HP printer. Michael glued and mounted the colorful page on cardboard and trimmed the board to size.

A place on the podium?

By Sunday afternoon, the board game Virus was ready for judging at the inaugural University of Oregon hackathon. It did not take first place. The gold medal was awarded to Game Full of Animals, a multi-player platform that allows up to 10 Android users to race each other. The silver medal went to VR Tetris, a refresh of the 1980s block-stack-and-pack arcade game. That team used an Oculus Rift virtual reality headset and Myo armbands to allow players to manipulate and stack 3D blocks dropping all around them.

And third place at the first Quack Hack went to….drum roll please…Team Virus for their innovative board game that combined high tech printing platforms and tools to make their ideas real. Nick and his teammates high-fived and collected their bronze medals plus a bunch of door prizes. Then, since nobody had studied all weekend, they each headed home to prep for the week ahead.

Regardless of whether Virus, the board game, ever makes it onto store shelves, Nick will have his creation in his portfolio, complete with 3D printed pieces. And the fact that he – a product designer – could collaborate effectively with coders just might give him the edge he needs in the future. 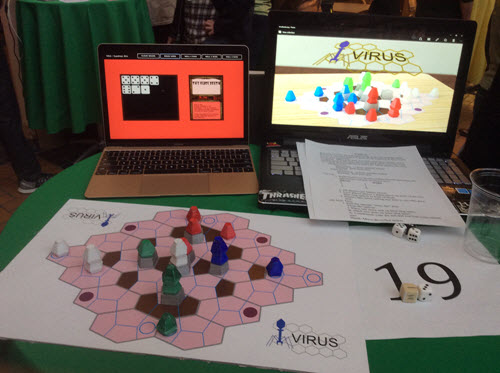 And the bronze medal goes to....