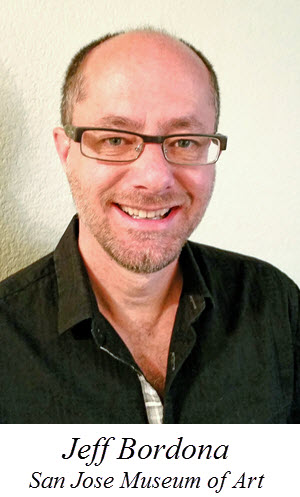 After many years in the museum world, Jeff Bordona knows what it takes to put on a successful exhibition – one that pulls in Millennials and Gen-Xers, as well as school tours and cultured seniors.

It takes “interactivity.” Jeff has seen too many stand-and-stare exhibits, cordoned off or behind glass, untouched, untouchable, and out-of-touch with the interactive and sharing technologies that are sweeping the globe.

When his museum, the San Jose Museum of Art, won its bid to present the travelling exhibit Beauty (from the Cooper Hewitt, Smithsonian Design Museum in New York), Jeff was determined to bring something special to the show during its 4-month stay in the heart of Silicon Valley. As the museum’s Director of Education, Jeff began a technology quest for something special – an experience that would let museum visitors take on the role of designer.

That “something special” had to be high tech, but with a low bar for engagement. It had to be cutting edge yet timeless, like beauty itself. It should be cyber – this is Silicon Valley after all – yet it should be more than bits and bytes. Visitors want something tangible to take away from their museum visit. Ideally, this something special would merge the familiar with the exotic, combining what everyone knows with a novel encounter. And it should be – must be – beautiful. 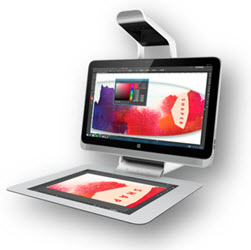 “We have unique challenges here at the museum,” Jeff explained. “We need something that can be used by pretty much anybody. We try to give our visitors activities that are suited for a multi-generational audience. The solution has to be fairly intuitive so it doesn’t take a lot of instruction. It needs to be spontaneous, easily recognizable, and something you can just jump in and do.”

Jeff had come across the Sprout Pro by HP in his omnivorous tech browsing. He was intrigued by its creative potential. He remembered how different the Sprout Pro is – almost in a creative niche of its own. Jeff sought out a Sprout at a nearby Best Buy store and played with it. The Sprout Pro, he realized, could be the interactive and intuitive design technology he had been searching for.

A new take on old tech

The Sprout Pro is HP’s inventive rethink of how a computer with dual monitors can work. Having a computer desktop that extends across a pair of monitors is nothing new. Support for dual monitors has been part of operating systems for decades.

Dual screens allow an application on the left monitor to be dragged across to the right, and back again. With a click of a mouse and a sweeping drag, an enormous spreadsheet or a panoramic photos can span both screens. It is one of the most useful productivity features ever added to a computer. To someone who has spent their cyber life confined to a single screen, the discovery of Window's second screen is like a Get Out of Jail card. 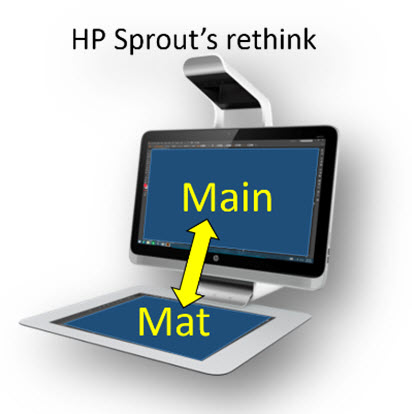 What HP did with Sprout Pro is essentially reposition those two screens. Instead of side by side – left and right – the screens are positioned vertically with one facing the user (the normal position), and the other on the desktop transformed into a touch sensitive mat – like a jumbo mouse pad, but with myriad new tricks of its own.

Off the top of the main monitor, HP hung a projector. In a second great rethink, the projector doesn’t project up and out onto a wall. It projects the second screen down onto the touch mat on the desk.

(Want to learn to play the piano? Download the Pianotime app for Sprout. A piano keyboard is projected onto the touch mat. The keys light up to show you the notes to play. You can also play your own composition and watch the notes appear on the main screen as the Sprout records every note.)

Another subtle rethink was to make the main monitor touch sensitive. Again, not new technology. Cell phones and tablets all have touch screens, but desktop monitors are still the province of mouse controls. Sprout Pro’s designers wanted their creation to be a natural and intuitive interface. With a touch sensitive monitor and a touch sensitive mat below it, images could be moved from screen to mat and back again with the swipe of a finger. 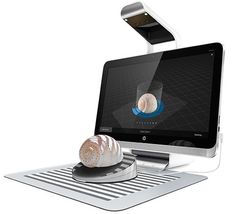 At that point Sprout Pro’s designers stopped tweaking old tech and grabbed some of the newest new tech – an Intel optical scanner. They installed it next to the projector, looking down at the touch mat. The scanner could not only scan 2D objects, like papers and pressed flowers, but also 3D dimensional objects, like an unpressed flower.

To expose every side of an object to the 3D scanner, HP created a rotating stage – a tipped turntable a little smaller than what you would find in a microwave oven. As the object spins, stripes of light flash over it in an effect like a topographic map.

The completed Sprout Pro was at once familiar and unique. To technologists looking “under the hood,” it is basically a Windows 10 desktop PC with dual displays and a fancy scanner. But to creative minds, the Sprout Pro was something brand new, in a class of its own.

That’s exactly what Jeff was looking for – old but new, familiar but exotic, high-tech but intuitive.

“After using the Sprout at Best Buy, I was convinced that it would be the perfect interactive design tool to help our visitors gain a sense of what it’s like to be a designer, using design-thinking methodologies, like rapid prototyping, and creative problem solving.” 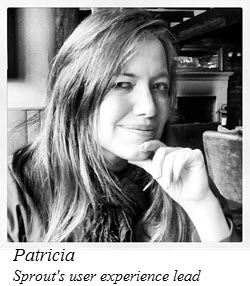 For Jeff the race was on to add a Sprout Pro as an interactive, high-tech garnish to the Beauty exhibition. After a flurry of phone calls and emails, Jeff reached Patricia Panqueva, Lead User Experience Designer in Palo Alto, and Molly Joy, HP’s Director of Immersive Computing Solutions.

“Immersive Computing” is the term HP chose to describe the rapidly blurring lines between the 2D world of screens and the 3D world we live in. Immersive Computing is one of those new tricks that computers can do today that they didn’t do – couldn’t do – a decade ago. The other new tricks sweeping the globe are Augmented Reality (AR), like Pokemon Go on smart phones, and Virtual Reality (VR), which uses video goggles to put you in the middle of a 3D movie or game.

The Sprout Pro is the cornerstone of HP’s strategy for Immersive Computing, which uses the scanner to bridge the gap between 2D and 3D.

Walking into his first meeting with HP, Jeff brought along Paulina Vu, the Manager of Museum Experience. They had just three weeks until the show’s opening, and they wanted to know what could be done in a public space on an unattended Sprout Pro in so little time.

“We didn’t know if it was even possible,” Jeff recalls.

Patricia, the user experience designer, met them in the spacious lobby of HP’s world headquarters and took them to lunch in the bustling HP cafeteria. As they talked, Patricia sketched on a notepad, capturing what the museum wanted and explaining what was possible for a Sprout Pro operating unattended in “Walk-up” mode. (The Walk-up configuration lets people use the Sprout, but it is “locked down” so no malicious hacker can gain access and sabotage the system.) 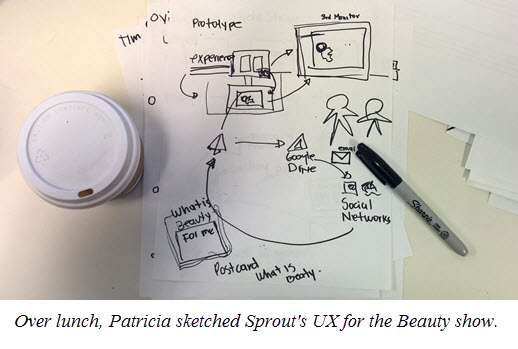 By the time lunch was over, a wish list had emerged.

With requirements in hand, Patricia rejoined the Sprout Pro team, and the race was on. Molly, the Director of Immersive Computing Solutions, turned the museum’s wish list into a plan of action.

The Walk-up configuration page made it easy to give the Sprout the museum’s “look and feel.” It took less than an hour. The challenge was enabling email and uploading to the museum’s Google drive. The team had two weeks to have a prototype ready to show Jeff and Paulina. That would leave a week for tweaking and handling the unexpected. The team put aside other projects and worked nights and weekends to deliver the Sprout just in time.

“It was a fantastic collaboration,” he said. “Our colleagues at HP were proactive in reaching out to us to ask how the Sprout was being used. When we noticed little issues – like when folks didn’t know that they could flick an image from the monitor down onto the touch mat – HP put together an animation that shows a hand flicking an image down.”

The Sprout Walk-up was put to the test during Community Day: El Día de los Muertos (Day of the Ancestors), when admission to the museum was free. The exhibition was swamped with families and children in traditional costumes. The Sprout proved to be both kid-friendly and kid-proof.

Mind blown
So what do you get when you invite random people to use a new technology tool with virtually no instruction?

“It was mind blowing,” said Molly Joy, Director of Immersive Computing. “People did things in 20 minutes that were unbelievable.”

By the time Beauty ended its run in February 2017, more than a thousand visitors had saved hundreds of designs, sent more than 700 emails and created scores of postcards.

Paulina, in charge of Museum Experience, was delighted.

“We did something new and great,” she said. “Our aim was to reach all of our audiences with Sprout, and that’s what we did. All ages – everyone – could use the device. It was a very collaborative effort, with people helping each other and taking turns.”

Jeff’s vision of a Sprout Pro as an interactive hub has given the museum a new engagement tool for future exhibits.

“We see this exhibit as the very beginning of in-gallery interpretation with the Sprout,” Jeff said. “The curators are asking how we can use it in upcoming exhibits, and we see a lot of potential for making deeper connections with our visitors and the artwork on view. We are thinking of moving it to a more central place in the museum. We still haven’t used its 3D capabilities.”

For HP, the last-minute rush and four months of “real world” testing demonstrated the friendliness and durability of a Sprout Pro in Walk-up mode.

“This was our very first instance of the Walk-up solution in a public setting,” Molly Joy said. “We were thrilled to be part of a prestigious show. The Sprout Pro was chosen for its unique form factor, which lets users be creative in ways never seen before. Now we are testing Sprout Pro Walk-ups in a dozen branches of the Los Angeles County Library.” 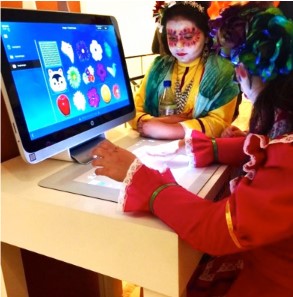