At the Consumer Electronics Show in Las Vegas, the second generation of the Sprout Pro by HP caught the attention of Melissa Riofrio, executive editor of PC World. She has followed the Sprout since its introduction in 2014. On Jan. 3, Riofrio posted a fresh, positive review. 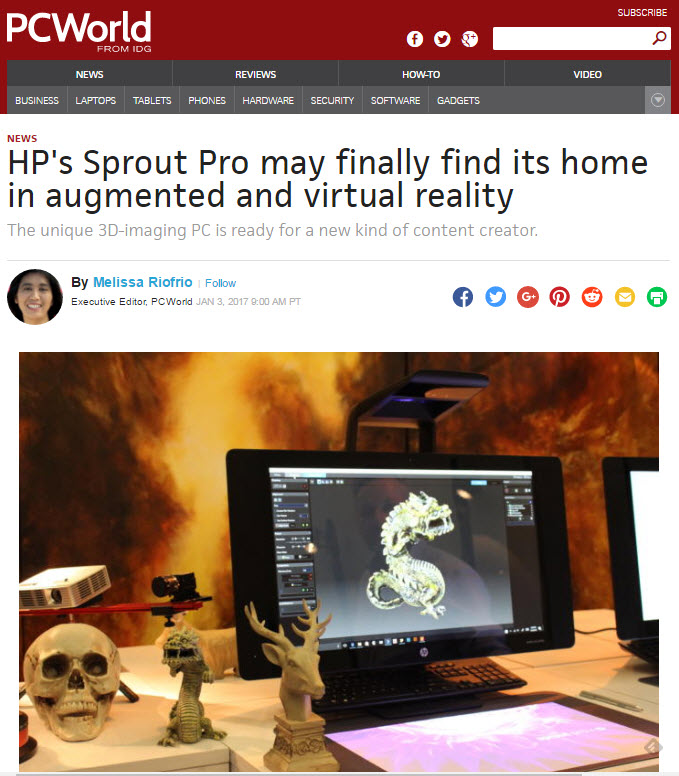 Riofrio wrote, “HP’s Sprout Pro is here to remind us that Microsoft’s Surface Studio is not the original creativity-oriented PC, let alone the most creative. Two years ago, the original Spout debuted with integrated camera that could turn 3D objects into 2D or 3D digital images…. Now, the Sprout Pro brings an upgraded set of talents to a market that may finally ready for it.”

With the Consumer Electronics Show in full swing, the Sprout Pro team is focused on the consumer roll-out. Later this year, they will launch a developer outreach, focusing on three target markets: education, retail, and manufacturing.

Read PC World’s complete review: HP’s Sprout Pro may finally find its home in augmented and virtual reality. The official HP announcement gives more depth about education and manufacturing applications. To get a head start on Sprout in the classroom, you can download the Learning with Sprout Handbook.

Then check out Sprout’s developer site, which is now hosted here on the HP Developers’ Portal. Our portal is your source for Sprout developer news and updates in 2017.