The HP System Default Settings Softpaq was developed to optimize settings and battery utilization on HP systems. HP recommends the Softpaq be installed on all supported mobile platforms, with and without Modern Standby support.

According to Microsoft - https://docs.microsoft.com/en-us/windows-hardware/design/device-experiences/modern-standby, Modern Standby, a special S0 power state, is designed to enable a nearly instant on experience on Windows devices, similar to smartphones. The technique, originally developed for Windows 8.0, has continued to evolve and  change with Windows 10 releases. Windows Modern Standby has 2 states, Connected (MSC), and Disconnected (MSD). In Connected mode, the system wakes up at some regular intervals, and any application capable ot running will connect to the Internet and sync updates as needed. Such applications need to know and be coded appropriately. Application support for MSC came with Modern apps, aka Store apps – for example the Microsoft Mail and Calendar UWP app.

The initial technology, named 'connected standby’ arrived with Windows 8.0. It has since been renamed Modern Standby. 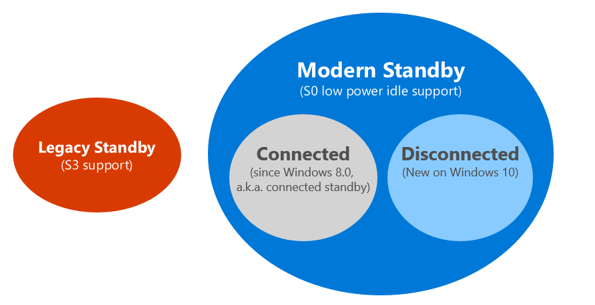 By 2018, HP began shipping systems with Modern Standby Connected (X2 tablets and X360 convertible laptops). For systems introduced in 2020, it is becoming the default power profile for standard (clamshell-style) laptops as well.

S0 – is a fully working Windows system (e.g. running mode). A variation of S0 is Low Power/Idle, or Modern Standby, which is the state this blog illustrates, where a system is in sleep mode but able to wake up regularly and allowed to operate, typically in short bursts, before going back to sleep. Systems in this mode will not operate in S1-S3 states.
S1/S2/S3 – variations of Sleep mode. In most cases, S3 is used where systems enter a low power state and memory is maintained to be able to restart quickly to operation
S4 – Hibernate mode. The system, based on battery charge levels, will copy memory contents to the disk and shutdown to prevent additional battery use. On restart, the contents of the hibernate file is used to restore the operating conditions and continue working
S5 – system is in full shutdown mode (e.g. powered off)

To find out if a device supports Modern Standby, you can use the command

In general, systems that support S0 Low Power/Idle state could also support standard S3 Sleep/Suspend state – as noted above. However, switching between Modern Standby (S0) and Suspend (S3) states is not supported, require special handling and a complete OS reinstall.

Modern Standby can be useful on mobile devices as the implementation allows quick (nearly instantaneous?) access to the Windows desktop from a low power idle state, sleep-like state. Note that a laptop in S0 Low power/Idle state will switch to hibernate in 45 minutes by default

Moderm Standby and Fast Startup are two distinct technologies. One does not require the other to operate

Fast Startup is designed in Windows 10 to enhanced the shutdown/restart process by first logging off any/all users and saving the state of the kernel to a hibernate file, then shutting down to S5 shutdown power off state. On restart, the contents of the hibernate file are restored and Windows restart avoding much of the system initialization typically required. This makes the power on process faster at the cost of extra time and disk use during shutdown

A quick review of battery consumption might be in order. A laptop battery consists of several Lithium-Ion cells with energy to power the electronics in the device. For example, an HP EliteBook x360 1040 G5 laptop supporting Modern standby comes standard with a 4-cell, 56.2 Wh Li-Io polymer battery – that is 56.2 Watt-hours of energy.

The components that used up most of the energy are the CPU, the display, and (if configured) the discrete graphics processor. Then, you add RAM, network cards connecting to a WiFI access point or continuously attempting to find one, maybe an LTE WWAN card and other components on the motherboard, and you can get siginificant power drawn from the battery. Although hard to achieve in real working conditions due to the benchmark requirements and testing specifications, the tested MM14 (MobileMark) benchmark, with an optimized configuration for this laptop is 18 Hours with a standard FHD panel, and 13 hours 30 minutes with a 4H/UHD panel. Again, these numbers are achieved but require the hardware components to be very specific and their state also to be controlled, so a benchmark with an Intel Core i5 procesor and an i7 will obtain different timings. This also shows that just a panel change, or even the panel brightness setting can significantly influence battery performance.

The typical CPU in commercial laptops is rated at 15W, although they can spike up to 25 W of TDP depending on applications in use so that can also make benchmark comparisons hard.The processor TDP rating can be found at Intel or AMT websites. example: Intel i5-8250u mobile processor (https://ark.intel.com/content/www/us/en/ark/products/124967/intel-core-i5-8250u-processor-6m-cache-up-to-3-40-ghz.html).

In addition, system memory is dynamic, which means it requires constant power cycle refresh to maintain its contents. When Windows changes to a S3 sleep state, the processor powers down but memory is maintained. A S0 Low Power/Idle (Modern Standby) state is similar to S3 but because Windows is still in a ‘running’ state, wake from sleep is faster and nearly instantaneous. Windows 10 is optimized to deliver longer battery life by postponing non-critical work and removing unnecessary wakeups during Modern Standby, particularly when the system is operating on battery power - https://docs.microsoft.com/en-us/windows-hardware/design/device-experiences/modern-standby-vs-s3.

Let's look at energy use. As example with an Elitebook x360 1040 g5 (circa 2018), here are some energy consumption numbers I observed, while plugged in:

and in Windows, running on DC, obtaining a battery report with:

shows a runtime up to 7:12 hours, and that is with full brightness, WiFi connected, etc., Your mileage may/will vary

In order to optimize battery performance on HP paltforms, HP engineers developed methodology to test battery performance combining BIOS tweaks and Windows settings. The result is a tool that takes those learnings and apply them to the Windows power profiles on HP systems. This is the HP System Default Settings Softpaq.

Similar to other useful utilities (HP Hotkeys and HP Notifications, for example), HP recommends the use of the HP System Default Settings (SDS) to optimize battery use, and could be used as a starting point to modify as required by users. The HP SDS takes the Windows default ‘Balanced’ power profile, and creates an HP Optimized version with the tested optimizations, mostly around Display and Battery settings. In addition, HP SDS can be used on models that support either Modern Standby or S3 sleep states, optimizing battery utilization for each system as appropriate.
As of this writing, the current SDS Softpaq is SP98454 (version 1.4.8) and supports a long list of HP desktops, laptops, and workstations.

During deployment, the HP System Default Settings Softpaq should be installed after first reboot, along with any other needed applications. It can be installed as a standard application silently with the runstring (from the softpaq’s .CVA file):

and can also be installed with HP Image Assistant from SCCM, MDT, Ivanti, and others.

Here are some settings that change between the Windows Balanced power profile and the HP Optimized power profile. This is on a HP laptop with Windows 10/1909 with the HP SDS Softpaq installed. Although the differences don’t seem large, testing has shown better performance from the HP Optimized settings. Note that the Microsoft Balanced plan timing numbers may be different from those in these pictures, and may also change between versions of Windows

A look at the default Windows Balanced Power Profile 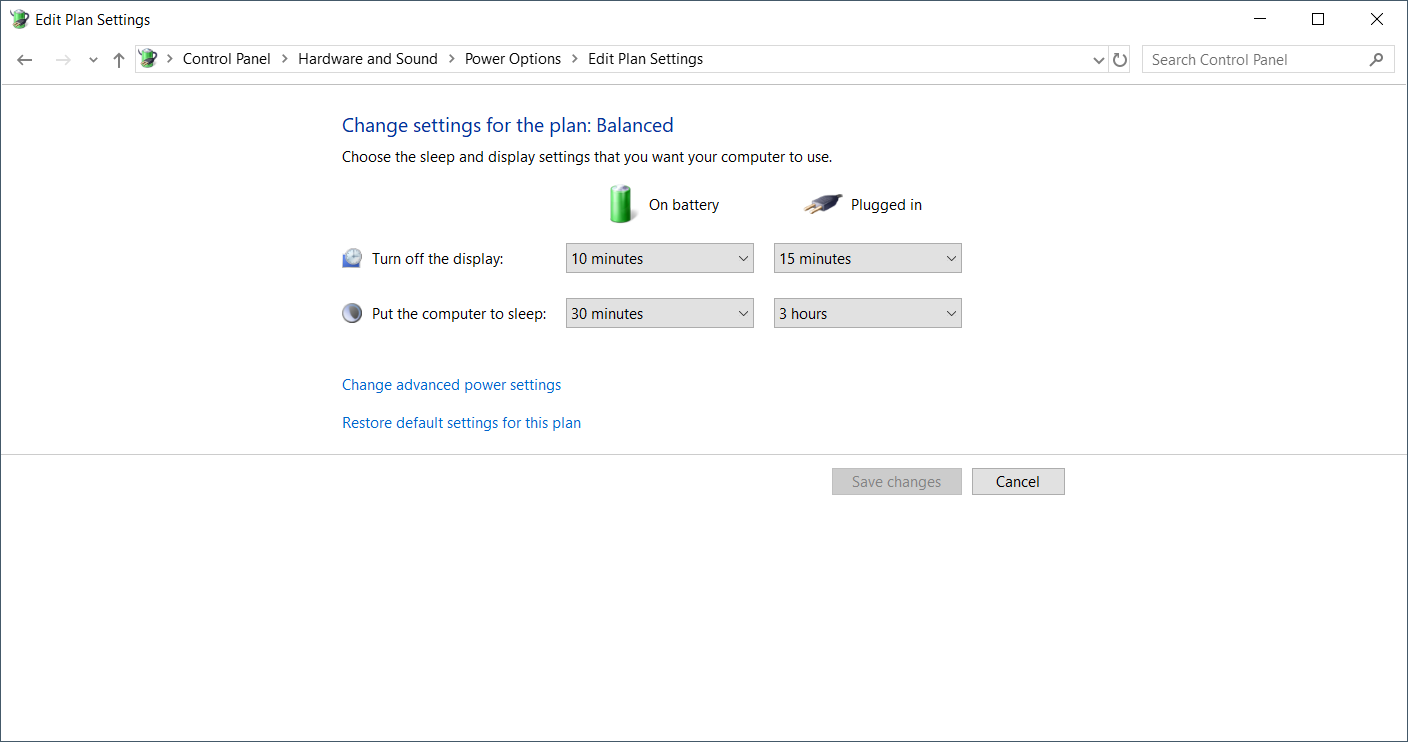 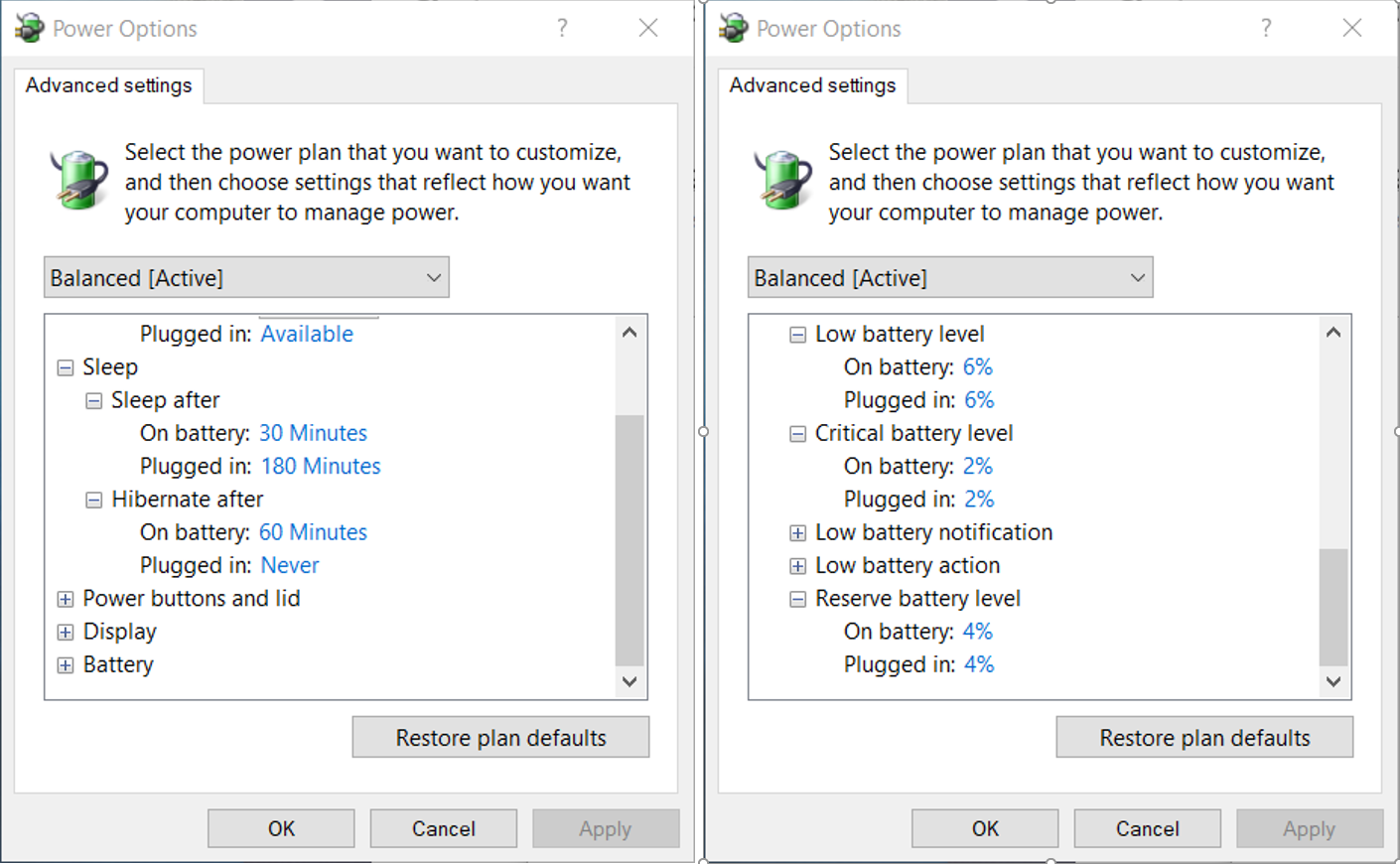 And after installing the HP Optimized Power Profile 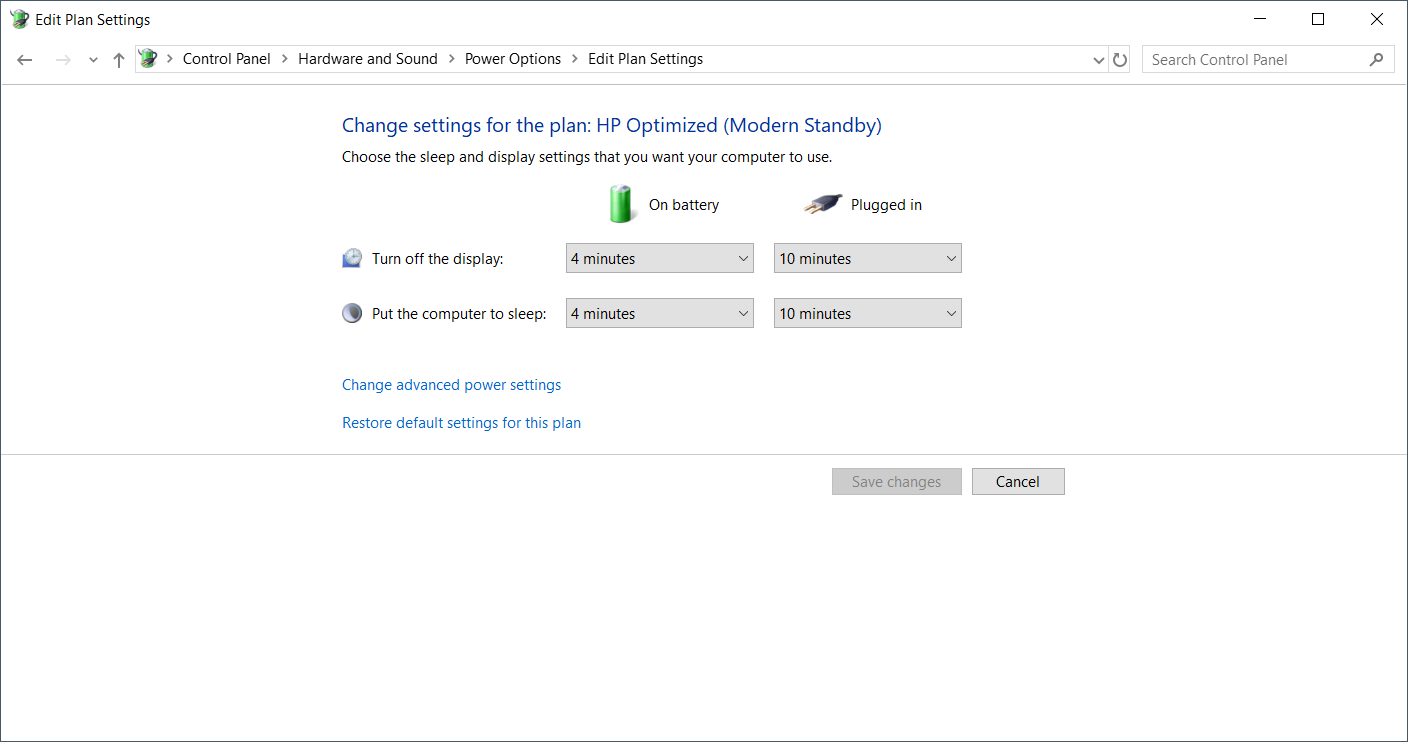 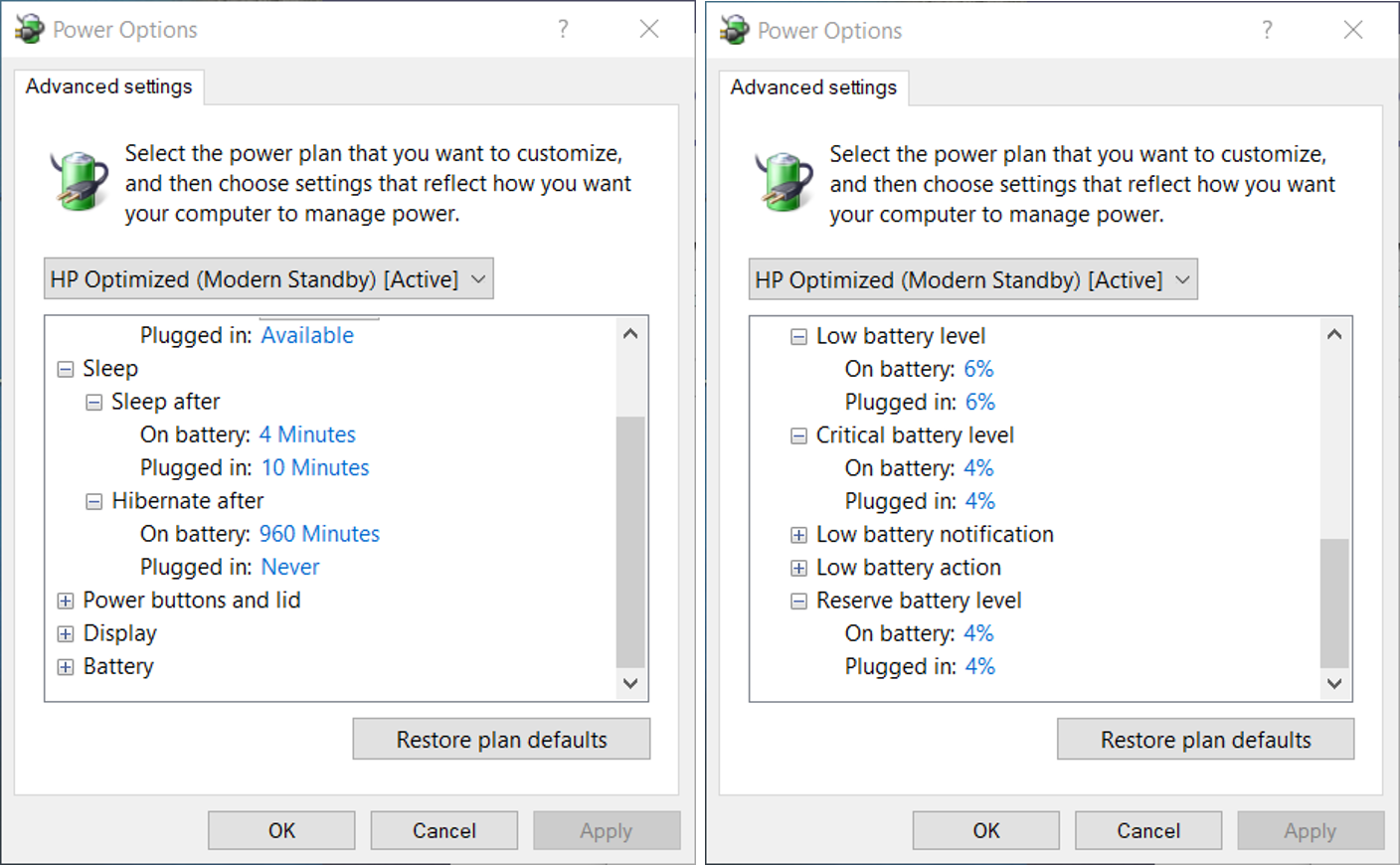 For comparison, here is an example of changes on a laptop that does not support Modern Standby, also imaged with Windows 10/1909 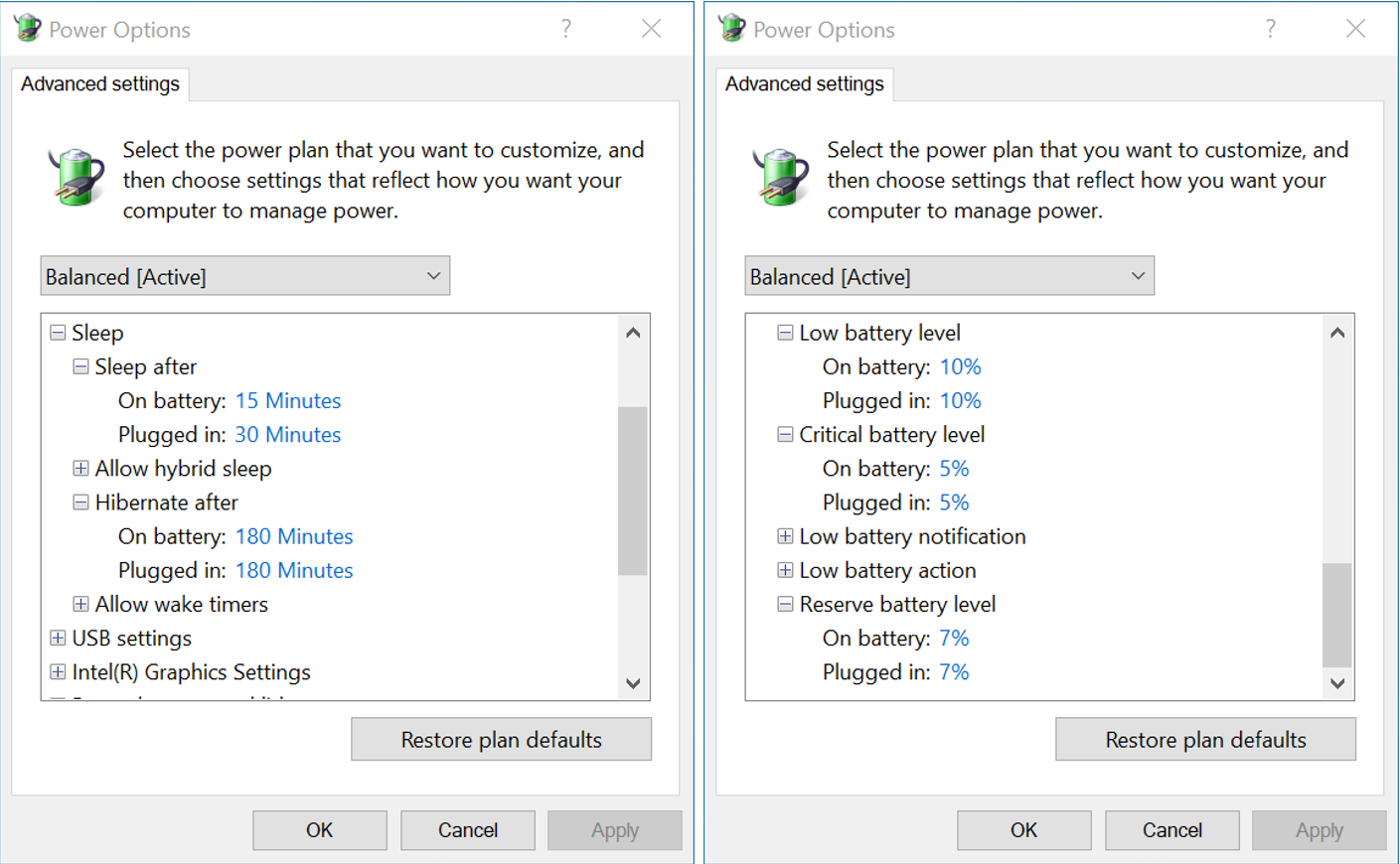 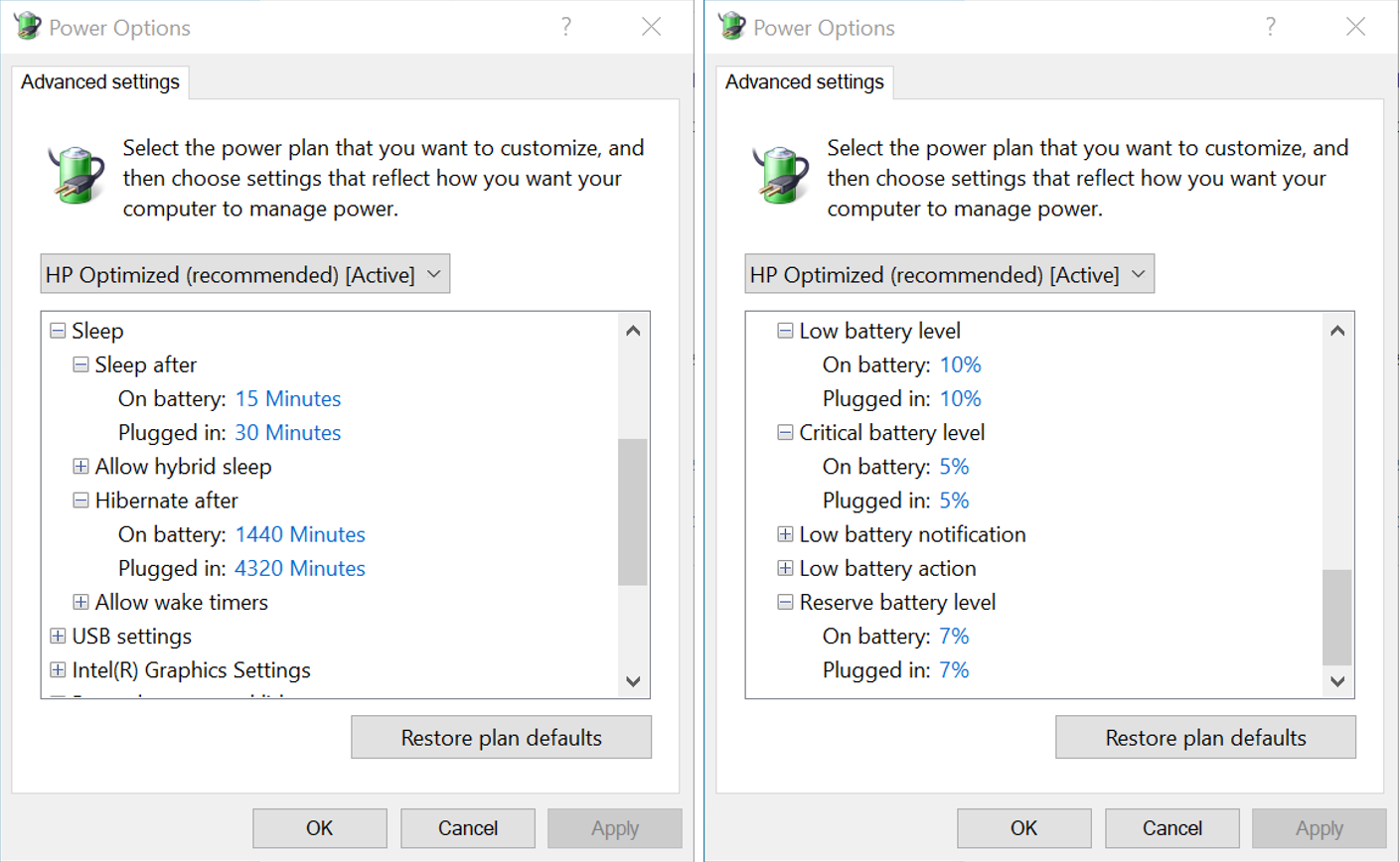