The implementation of the UWP driver model by Microsoft imposes restrictions on how a complete driver package can be deployed when a PC is (re)imaged. Drivers with a control UWP application are split between the hardware-enabling driver and an appx package, typically installed with DISM.

However, when utilizing enterprise deployment tools, like Microsoft MEMCM, systems are imaged by applying Windows and then injecting the drivers (usually from DriverPacks), where only the drivers are installed. This results from the default behavor that the installation of a UWP appx application should done by a user from the Windows app store; which means a user profile was created and a user was logged in. The issue is that in most cases, access to the Windows store is curtailed in corporate PCs, resulting in some functionality missing from the PC. A pen/stylus application comes to mind, for example.

In order to help with the installation of drivers’ appx applications, we will show how to package and inject these components into the default profile as the image is being built in an OS deployment task.

NOTE: The process outlined below can vary by driver, where the UWP control application can be packaged differently by vendor. Also, with our technique, if the Softpaq itself requires separate installation, its UWP appx package will be installed prior to the Softpaq – think HP Hotkeys software here. To alleviate the inconsistencies, HP software teams are developing a more standardized method for delivering drivers’ UWP components, so in the future, packaging these for installation will be made simpler.

The first step is to identify which drivers contain UWP applications and then to find and package those for installation. The best tool for identifying Softpaqs that contain UWP components is HP Image Assistant (HPIA). HPIA can list all available Softpaqs for any HP supported system and supported Windows versions. When analyzing for a product and OS, the resulting list will include an UWP icon next to the Readme and CVA icons, as needed. You can also select to have HPIA check ONLY Softpaqs with UWP packages

To deliver each driver UWP application, we first download and expand the Softpaq, then locate the DISM install command string.

If the Softpaq has its own appx install command file we will modify the DISM string in that file to run DISM against an offline image, from: “DISM /Online” to ”DISM /Image:%1\”. We will provide the %1 path to the command when calling the script in the Task Sequence.

NOTE: follow screenshots below for examples of deploying HP Hotkeys, Synaptics Pointing Device, and Intel Thunderbolt appx control apps, and the separate Softpaq package – needed for Hotkeys - prior to OOBE.

As already mentioned, we must locate the file for the actual UWP installation portion and modify the DISM string in that file. One way to locate the file is with PowerShell. For example – let's find every file that contains a DISM string (appx packages are installed with DISM):

Unfortunately, there is no cheat sheet for finding the appx installation from an extracted Softpaq. It can be part of a setup.bat, or it may have its own appx install batch file). And, not all the appx install files are named the same. For example, the one for the Thunderbolt Control Center (currently) is called appxinst.cmd, where below you can see the Hotkeys has a different name.

Finally, the method injects the appx package into the image during OSD prior to a user profile being created. This way the app should be present for any user profile signing in after the image is laid down

NOTE: HP Image Assistant will create an installation batch file for the contents named install.cmd. This file is not part of the Softpaq, and will not exist if downloading and extracting with the /s /e runstring options

Step 2: Find the file containing the command in the copied folder where the appx gets installed with DISM – we try the command show above:

Next, edit the cmd file, and look for the DISM installation of the appx application 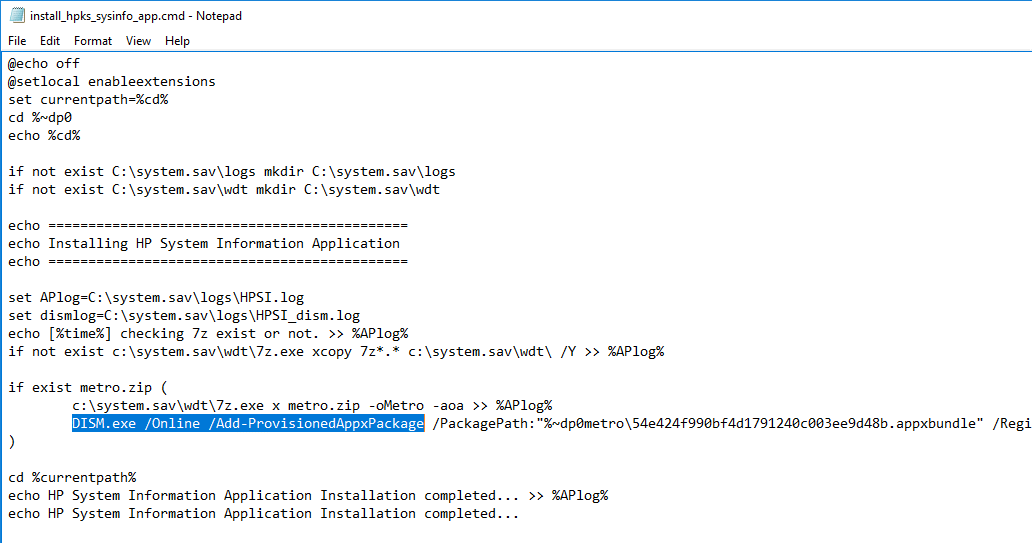 Modify the DISM installation string from /Online to /Image:%1\ 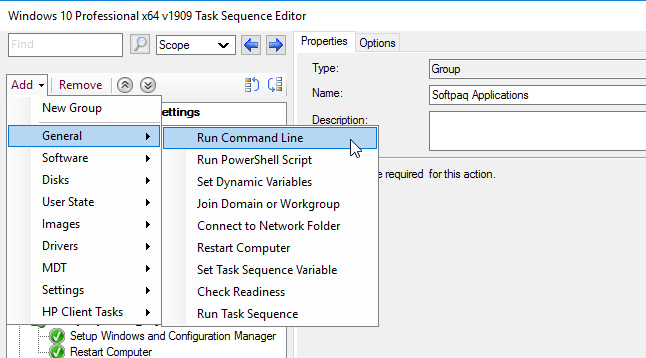 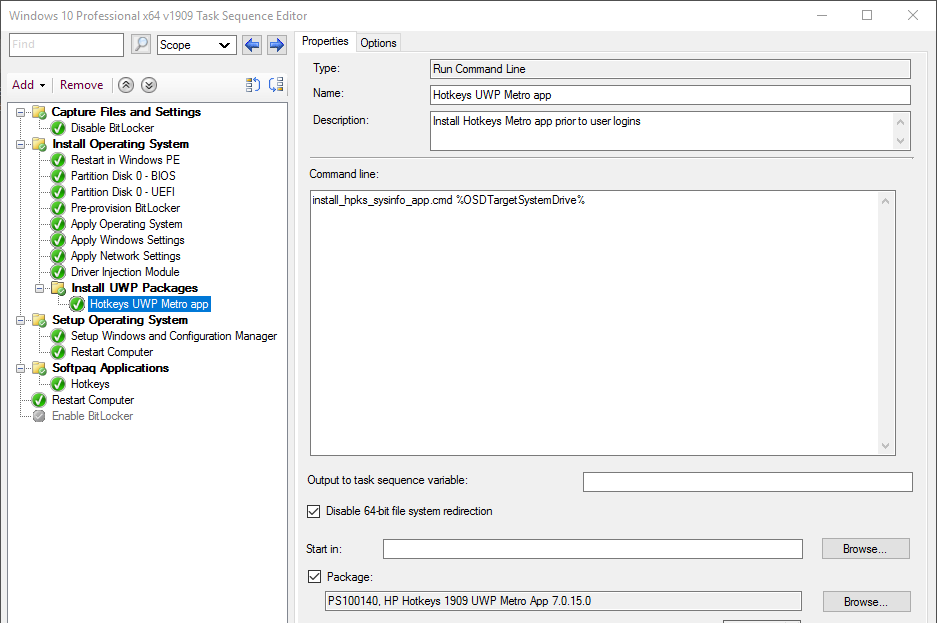 Step 5: Develop a MEMCM Package for the Software application to be installed outside the standard DriverPack injection 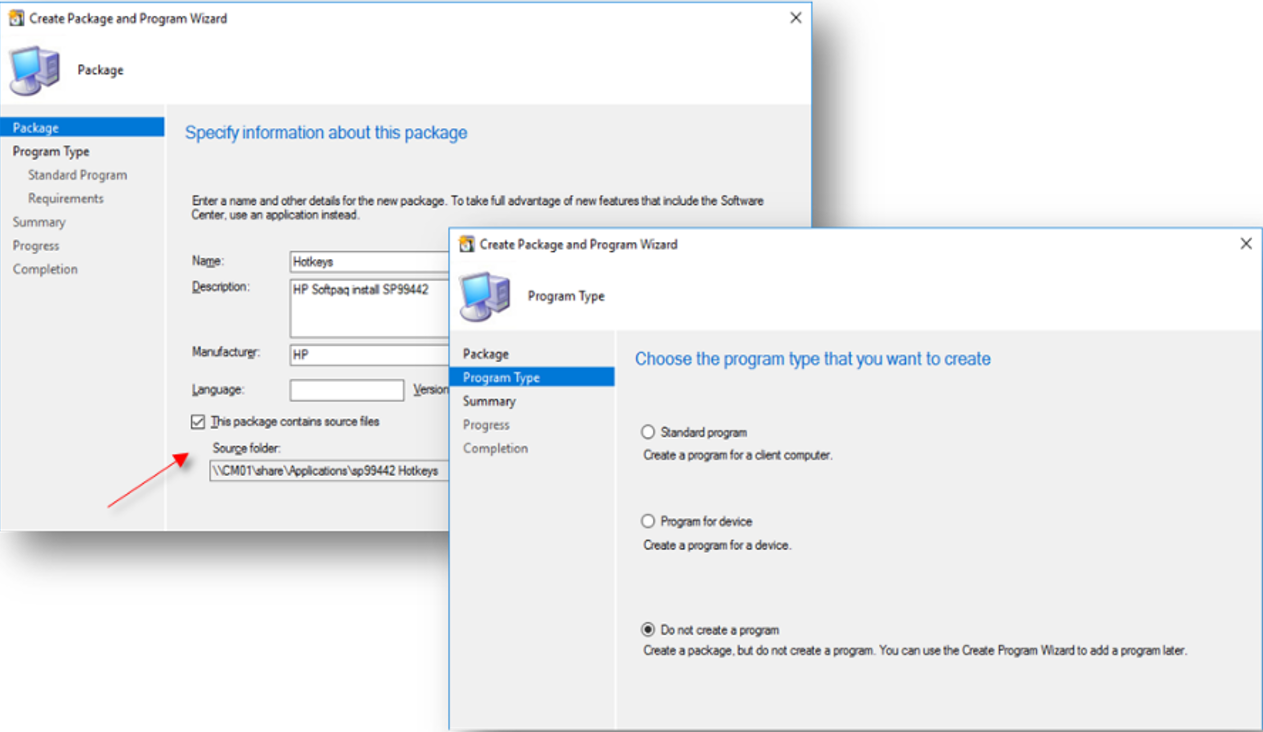 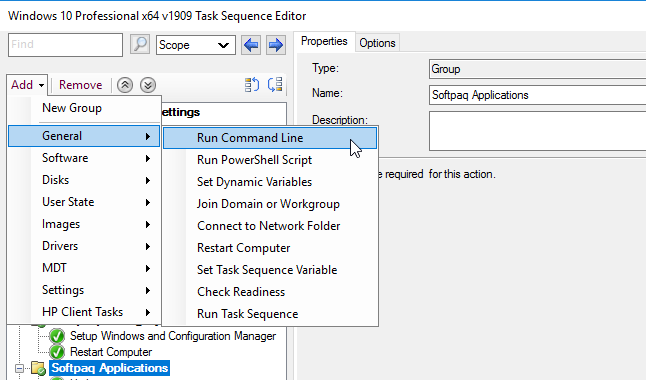 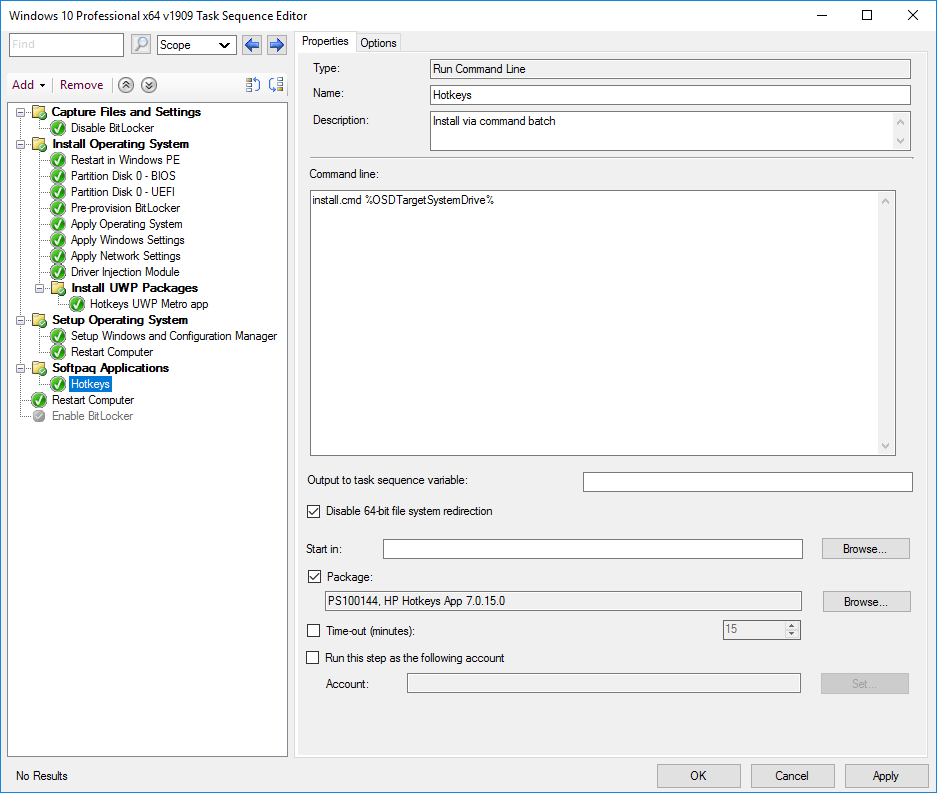 Finally, you will get to show something like this in your OSD Task Sequence 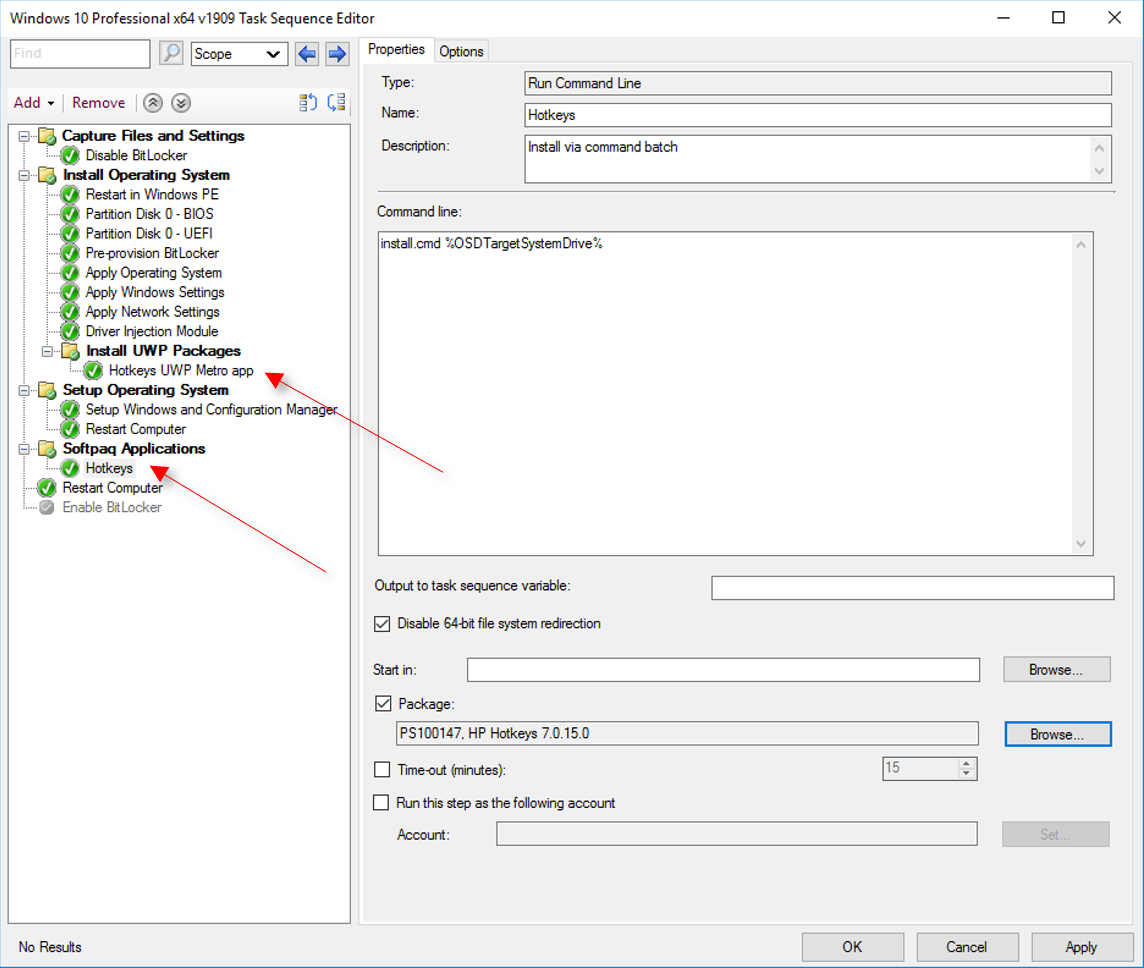 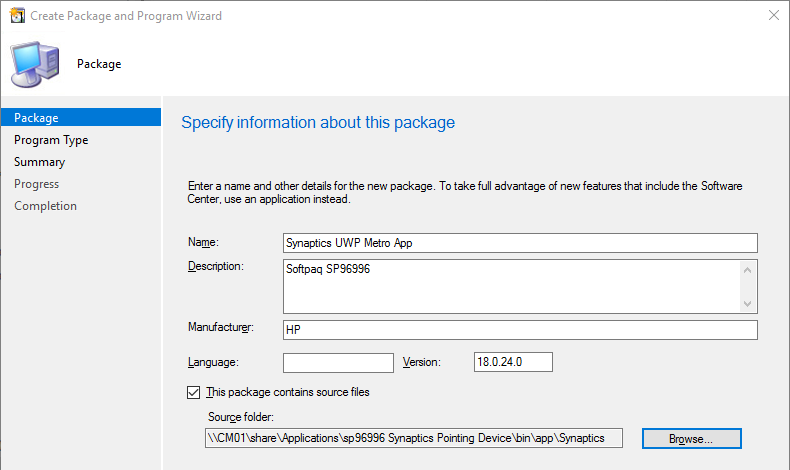 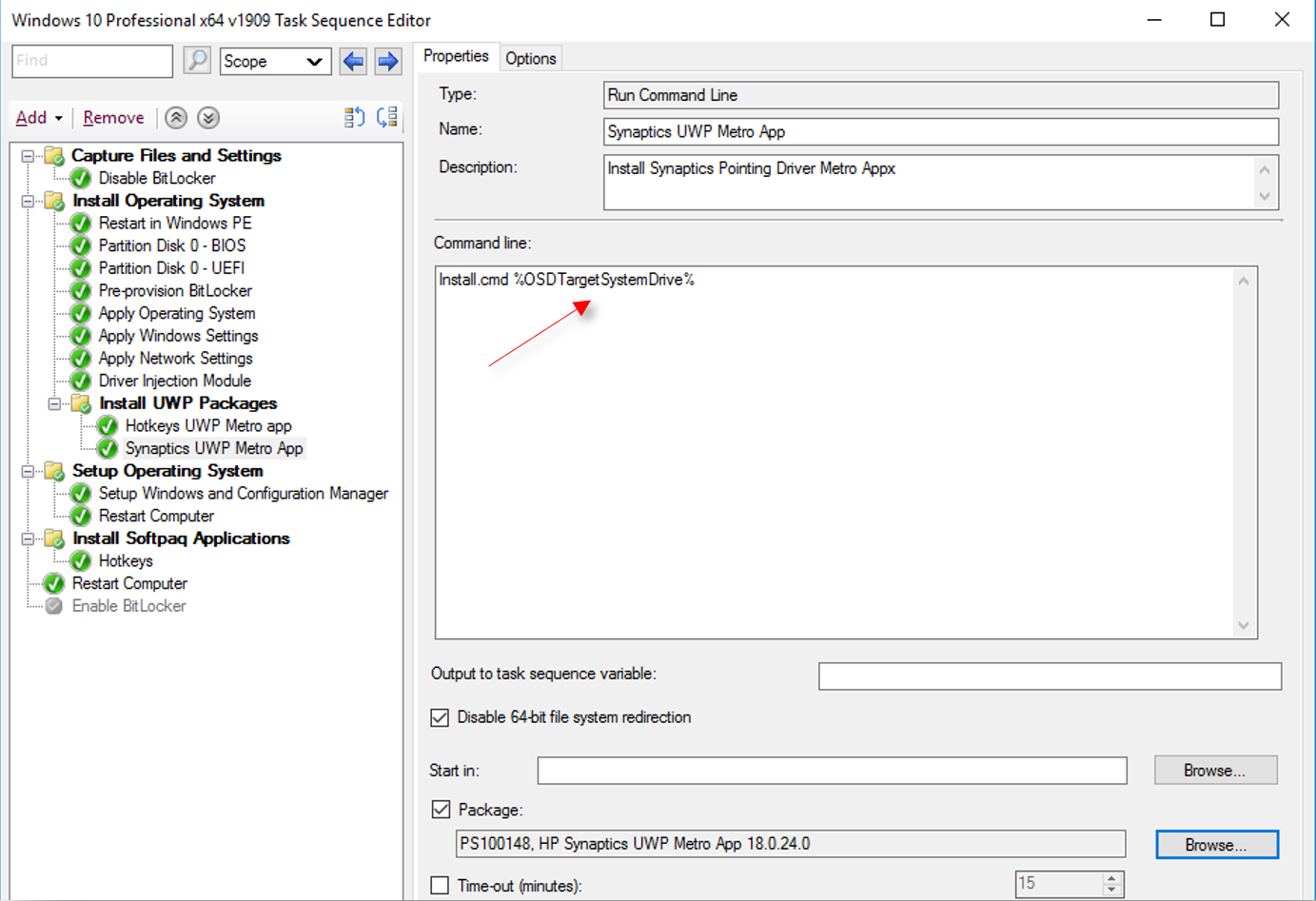 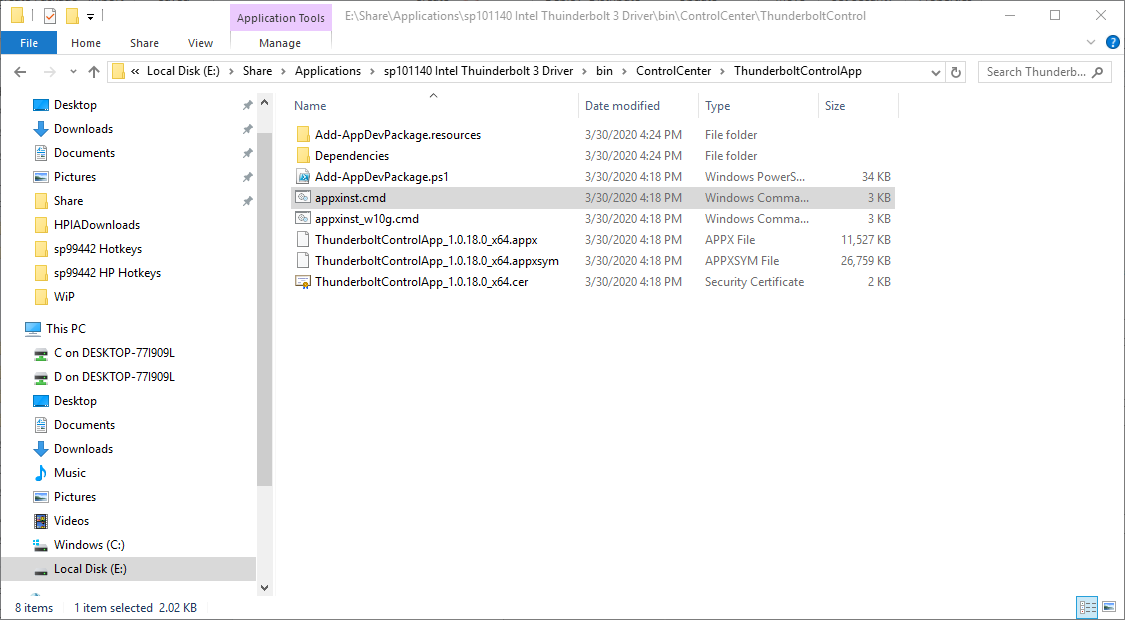 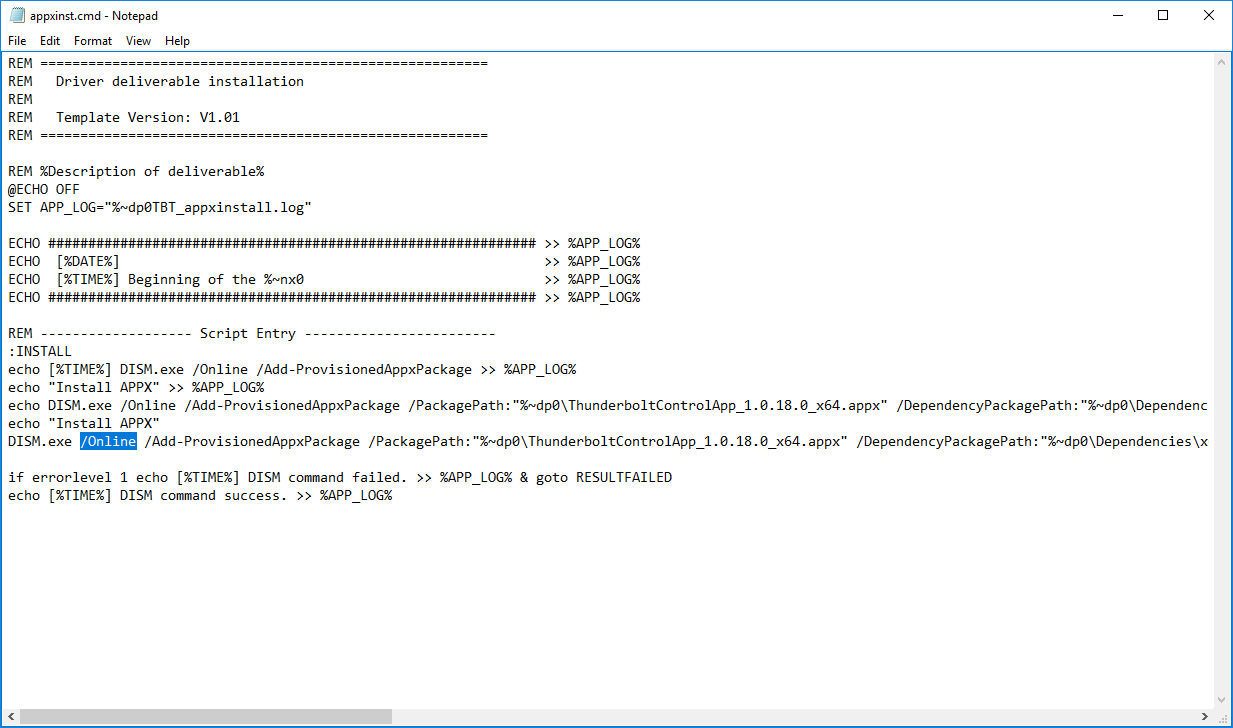 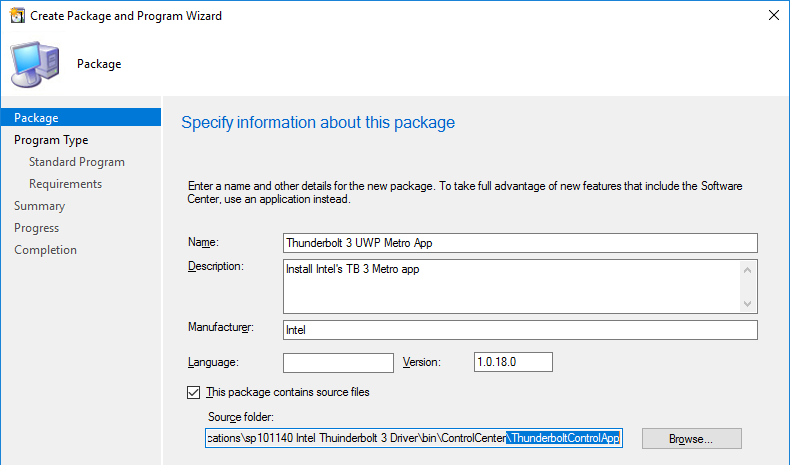 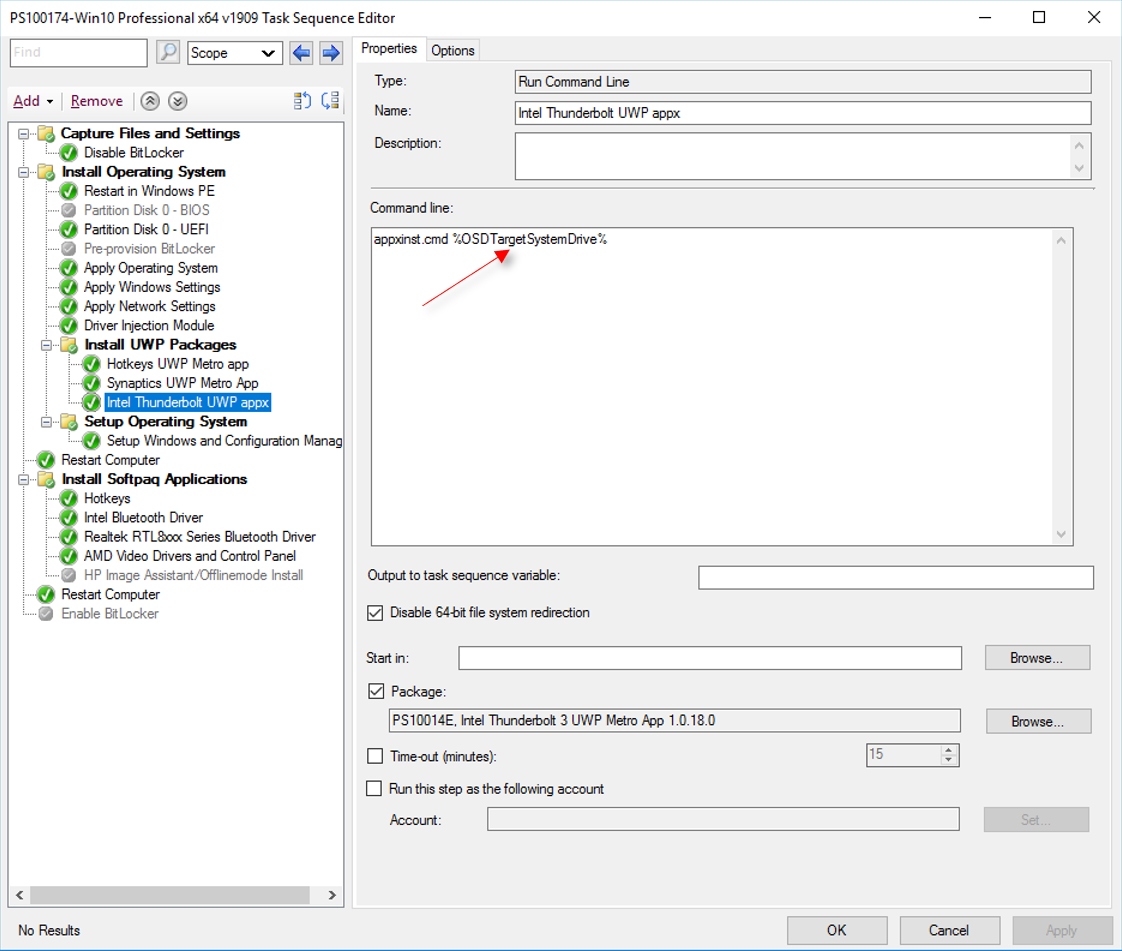 This may be able to be simplified with PowerShell, which is not explored in the review above. Some of the commands that can be used to install appx (or appxbundle) packages is listed below

Author : dan.felman
Trying to install HP Programmable Key using your guide above but we want to trigger the appx installation via VB-script instead but I can't get the installation to work. Is it possible for you to create an how to för that software aswell?
markus.sacramen...

As long as you install the Driver that is included with the DriverPack, then you can install the Metro/UWP appx in a couple of different ways: 1) download and unpack the Programmable Key Softpaq sp103609. Create a Package pointing to the unpacked 'bin' subfolder, and create a TS step to run 'install.cmd' from the folder. This will install the driver (if not already there), the Framework Fusion (if not already installed), and the appx driver via online DISM 2) download and unpack the UWP driverpack, softpaq sp103844, and you will see a folder named 'HP_Programmable_Key_(SA)_(P00XFX-B2M)\src' . You package that src folder and create a run command step to run 'InstallApp.cmd'
dan.felman

Great writeup Dan, and certainly explains the source of the issues I've been experiencing. I'm currently struggling to get the Thunderbolt driver/app installed in a MEMCM task sequence. I'm using SP107571. It seems there's an install.cmd that basically does 3 things: 1. inf install, 2. Intel certificate install, then 3. appx install. I've been trying to run this install later in our TS along with other software installs, but we're getting a failure on the appx install (the drivers/cert get installed fine). So using your method I see we'd need to bring this earlier in the TS, whilst still in PE. If so, how would we achieve the certificate install? It's not in the appxinst.cmd, and presumably if we use this method the drivers won't be installed via the install.cmd but rather by DISM injection. Thanks in advance for your advice.
Andrew Morgan

@andrew morgan, it looks like the Thunderbolt softpaq (107571), when unpacked, in the bin folder, it shows an installer cmd file for the UWP appx application, install_TBT_appx.cmd. you should be able to captuer the bin folder in a SCCM package, and run the batch file to install just the appx
dan.felman